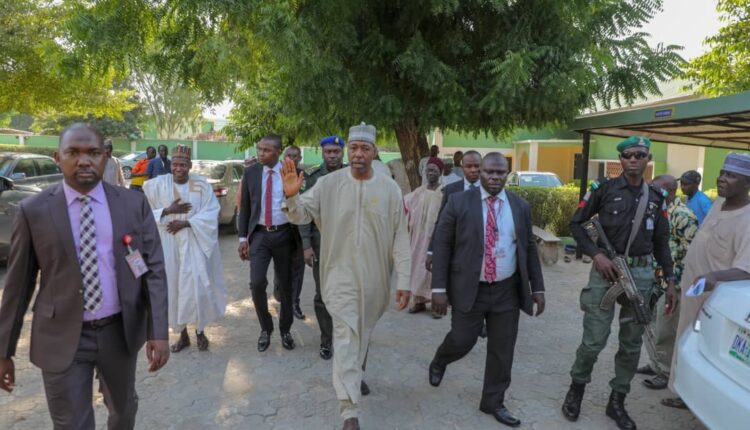 In a bid to fast track retirees pension verification process, the Borno State Governor, Babagana Zulum, has urged the committee to pace up with their assignment and ensure all retirees are covered within given duration, saying the delayed being experience was having negative effect on the retired civil servants.

He explained that the need to ensure that those who had dedicated their lives for public service were well catered for after their years of service necessitated the call and verification exercise from the onset.

The Governor noted that despite the state’s lean resources, his administration would stop at nothing in catering for the welfare of all civil servants, particularly the retirees.

Speaking when he appeared at the office of the Auditor-General for Local Government, venue of the ongoing pensioners’ verification exercise on Monday, Zulum charged the verification committee to adhere strictly to their terms of reference.

He explained that his visit was to assess the progress of the excercise been carried out by the committee inaugurated in September 2020 to verify retired workers across the 27 local government areas in Borno, in preparation for payment of pensions and gratuities government was owing retirees.
Meanwhile, Zulum had earlier on Monday relieved the Executive Chairman, Borno State Internal Revenue, Ali  Bulama of his appointment.
This is coming as he also approved the appointment of Mohammed Alkali as the acting Executive Chairman of the Borno State Board Of Internal Revenue.
Alkali, until his appointment was the Senior Manager Tax, Federal Inland Revenue Service. He is ADKAR certified change management practitioner and holds a Bachelor of Science degree in economics and Masters in Business Administration.