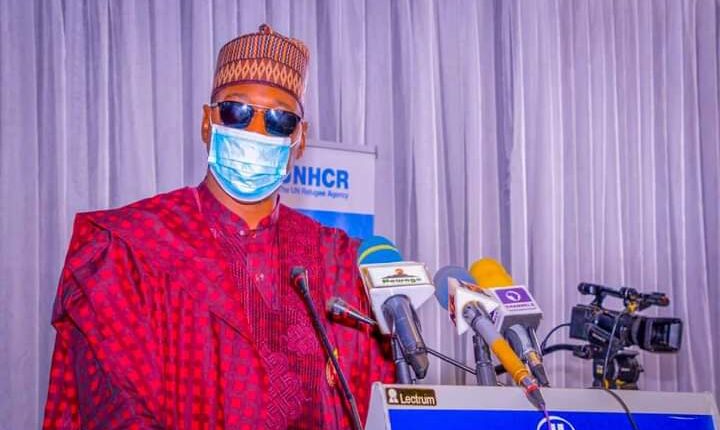 He indicated that though the government was doing its best through different steps being taken, including construction of over 6,000 low-income houses in different parts of Borno for phase by phase resettlement of refugees and IDPs, there was need for further collaboration from an international agency, especially the UNHCR.

Zulum noted that his administration’s aim was to ensure return of normalcy that would aid resettlement of the IDPs and refugees through various support and collaboration with important stakeholders like the Federal Government, the Nigerian military, UNHCR, and other neighboring countries.

Speaking while delivering a keynote address at the stakeholders meeting on the implementation of global compact on refugees which took place at the Congress Hall, Hilton Hotel, Abuja, yesterday, the governor noted that the IDPs and refugees safe return had become imperative to ensure their dignity are restored and feel a sense of belonging again.

He noted that the Borno residents taking refuge in neighbouring Cameroon and Niger Republic have lived some of their worst nightmares and have begun agitating to return to their communities and pick up the pieces of their lives.

“Many communities have been resettled in the last couple of months and people are going back to their communities voluntarily. So, there is need for more collaboration support from reliable partners to facilitate their smooth return and resettlement,” he said.

On his part, UNHCR country representatives to Nigeria, Chansa Kapaya, promised that the agency would apply the provisions of global compact on refugees in facilitating safe return of refugees and IDPs in Borno.

He listed the provision to include easing of pressures on host countries, enhancing refugee self-reliance,expanding access to third-country solutions, and supporting conditions in countries of origin for return in safety and dignity.

“The Global Compact on Refugees is a framework for more predictable and equitable responsibility-sharing, recognizing that a sustainable solution to refugee situations cannot be achieved without international cooperation. the GCR indicators framework,” Kapaya said.

It would be recalled that as part of efforts to ensure safe return and resettlement of Borno IDPs and refugee, the Federal Government, the state’s Governor, Babagana Zulum, and the United Nations representatives recently met to discuss modalities that would guarantee smooth resettlement of the IDPs.

The meeting was convened to facilitate full restoration of civil authority and normalcy that would aid seamless resettlement of the IDPs and strengthen the peoples’ trust in both apex and state governments.

At the meeting, both apex government and the UN representatives restated commitment that the duo would be supporting ongoing efforts of the state government aimed at relocating and resettle the IDPs back to their ancestral homes across the state.

LASG to tackle poverty through women empowerment, other programs