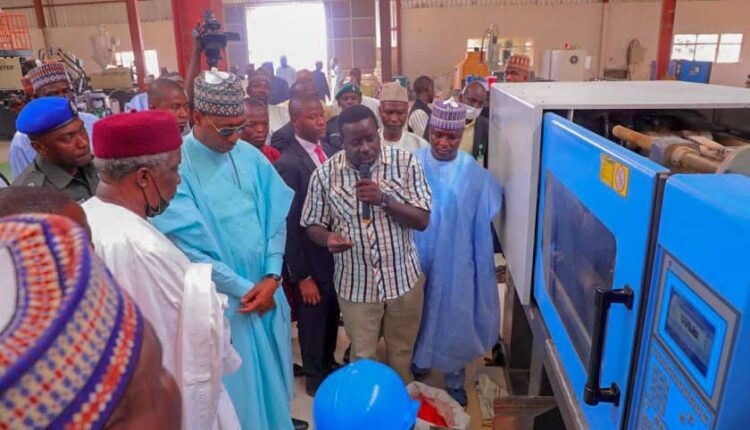 Share
The Borno State Governor, Babagana Zulum, has approved the immediate upgrade of five factories currently operating at low production output across the state, saying plans are being concluded to resuscitates nine other factories for maximum output.
He explained that the need to take advantage of Borno’s geographical location with an economic gateway to three countries necessitated the approval for upgrade and resuscitate ailing industries to increase the state’s economic fortunes.
As stated, the factories approved for upgrade include the NEITAL Shoes which processes animal skin to leather, and finished shoes, and four factories located at an industrial hub established along the Maiduguri-Damaturu highway by Governor Kashim Shettima, in which 16-chain of factories were installed, most of them for the production of plastic irrigation equipment, other plastic products, and processing of a variety of agricultural produce.
Speaking after touring the factories yesterday in Maiduguri, Zulum, said that he was targeting the resuscitation of nine factories that would operate at their maximum production output, a development he claimed, would create employment opportunities in the state.
He explained that the tour was to supervise the Engr. Abatcha Jarawa-led technical committee on factories resuscitation and give all necessary support in ensuring the factories resume working at an optimal level for improved production.
During the tour, Zulum directed complete resuscitation of the factory’s shoe processing section which was not in operation and certified that the section of the industry which processes animal skin ready for industrial production was in full operation.
The Governor who also inspected the plastic factory where part of over 3,000 school chairs produced by Borno Plastic Company, expressed satisfaction with the quality of work being done at the factory.