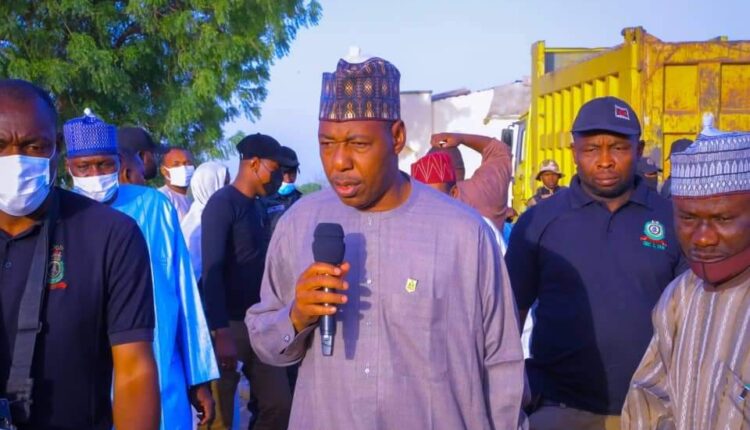 Borno State Governor, Prof. Babagana Zulum, has announced his administration’s plan to transform communities in five Local Government Areas Headquarters to urban levels and ensure a face-lift befitting the facilities across the state.

He added that the urbanisation drive was in line with the 25-years post-Boko Haram development plan recently launched by his administration to rebuild the state and ensure repatriation and resettlement of displaced Borno residents.

Zulum said that the local governments shortlisted for the first phase of the urbanization scheme include communities in Biu, Gubio, Kaga, Mafa and Monguno, adding that others would follow after successful completion of the first phase.

Speaking yesterday during his humanitarian visit and activities in Mafa, the governor noted that his administration would build houses befitting the standards of civil servants in the earmarked local governments and ensure their comfortable shelter are taken care of by the government.

“We have started urbanization of villages and towns starting with five local government areas. In each, we are building houses that will provide accommodation to civil servants in flats and bungalows. The LGs are Gubio, Biu, Monguno, Kaga and Mafa in the first phase” Zulum said.

During his stay in Mafa, the governor paid unscheduled visit to the general hospital during which he came across some dedicated health workers, amongst them, an Igbo woman, Mabel Ijeoma from Anambra State that had been working in the healthcare facility for 15 years, who, like some others, received N200,000 gift from the governor.

The governor, however, inspected some ongoing projects, which included a drip and sprinkler irrigation scheme, a vocational training centre, a shopping complex, and motor park with 150 market stalls.

Zulum later addressed residents urging them to take advantage of the holy month of Ramadan and pray for the return of peace to Borno and the entire nation.

“I kindly call upon all of you to intensify in your prayers this holy month of Ramadan, let all of us devote ourselves in prayers for peace to return to our state and the country” Zulum urged.