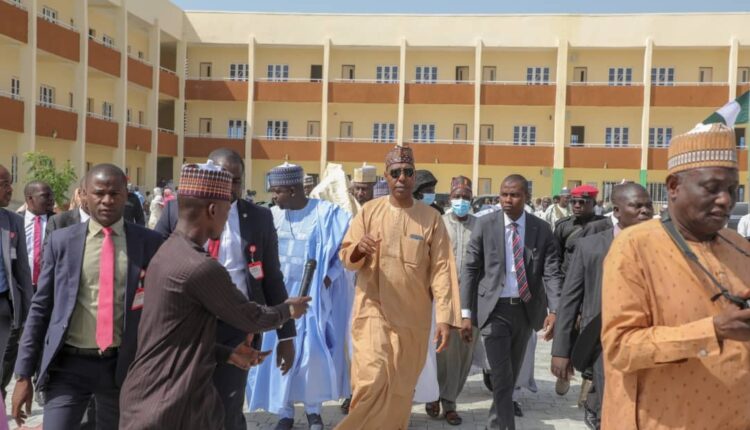 Share
The Borno State Government has disclosed that plans are being concluded to enroll no fewer than 3000 kids across the newly built schools in Ajilari Cross in Jere, and Abuja-Sheraton in Maisandari ward of Maiduguri metropolitan council area of the state.
The 3,000 children, it explained, would be drawn mostly from underprivileged families and that the beneficiaries would be out-of-school children who are of school age in both low-income communities.
The State Governor, Babagana Zulum, noted that though built by the government, the schools would be run through a committee from both communities and that such would engender proper administration devoid of government interference.
Speaking during the commissioning on Monday, Zulum maintained that the community-based approach was adopted to give the people a sense of belonging and give hope for a new dawn and better future as part of his administration’s commitment to rebuilding the state.
According to him, each of the schools has 30 classrooms with each to accommodate between 40 to 50 pupils at the maximum, meaning about 3,000 pupils in 60 classrooms and the schools have been equipped with desks and chairs while pupils already admitted were provided free uniforms, while
48 teaching and non-teaching staff, including the headteachers, will serve at both schools at an equal ratio.
“Government is handing over the school to the community and the community is expected to run the school through a committee within the community, while government will pay teachers salary through the Education Trust Fund on monthly basis by way of grants to the School. In addition to this, government is determined to maintain and sustain the school in close collaboration with community efforts in ways that will serve generations” he said.