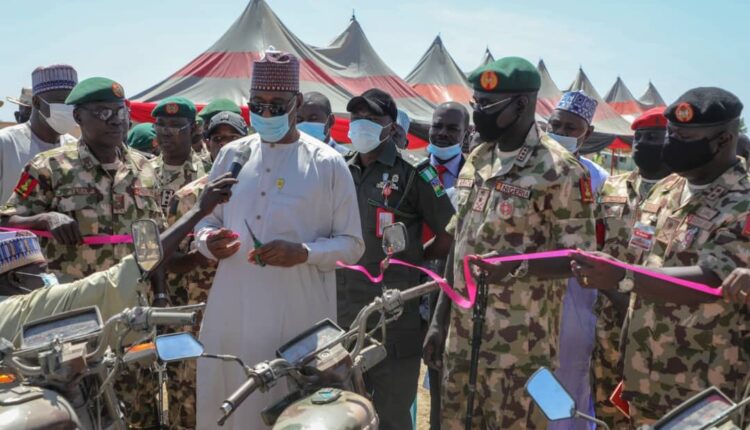 Share
As part of measures to augment Nigerian army’s aerial and land offensive against Boko Haram and other terrorists, the Borno State Governor, Babagana Zulum, has approved the donation of 100 motorcycles for army’s remote operations across the state.
The gesture, he said, would aid the soldiers in chasing insurgents who use motorcycles to escape through remote corners in the bush and some tough terrains that vehicles could not easily access.
Zulum said that the Attorney General and Commissioner of Justice, Barr. Kaka Lawan, had been directed to immediately provide the motorcycles , saying other necessary aid would be provided to ensure efficient counter-insurgency operations in the state.
Announcing the intervention on Wednesday at a brief ceremony in Maiduguri which was attended by military commanding officers from operation Lafiya Dole, leading the fight against boko haram, Zulum reiterated his administration’s commitment to ending insurgency across the state.
During the occasion, the governor at the occasion, the governor also commissioned about 400 members of the Civilian Joint Task Force (CJTF) enlisted into the Nigerian Army’s supper camp strategy in the fight against insurgency in Borno.
Furthermore, Zulum promised to continually support the Nigerian military, and volunteers, including hunters, vigilantes and the CJTF, in sustained effort to attain peace and security, adding that his administration was planning the reconstruction of more towns and villages.
He, however, enjoined insurgents who may be hiding in Sambisa forest and bushes in the fringes of the Lake Chad to lay down their arms and surrender.
“For those that are still in the bush, terrorizing innocent lives and destroying properties, i call upon all of them to surrender. You are killing your brothers and sisters, destroying your own infrastructures that were built using money generated through tax from your forefathers. Today we have all seen the level of devastation, nobody is been left, we are all affected in one way or another,” the statement said.