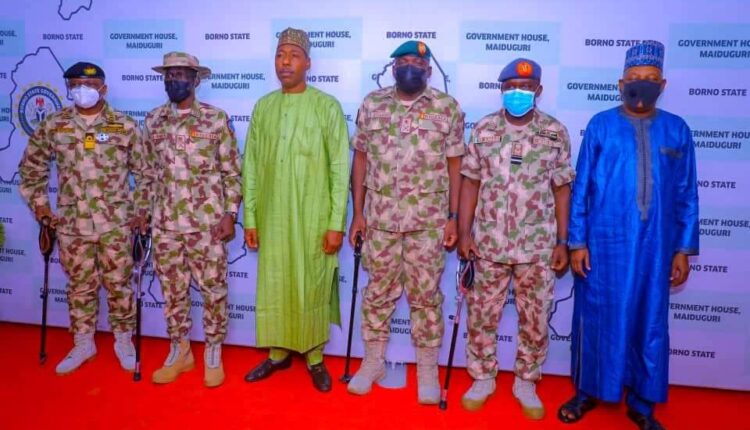 The Borno State Governor, Babagana Zulum, has tasked the newly appointed service chiefs to adopt stronger and effective collaboration with neighbouring African countries’ military in their strategies aimed at defeating Boko Haram and other terrorists across the country.

Aside from the strategies, the governor also enjoined the military leadership to welcome criticism as such would dominate their tenure as the nation’s top military officers, saying such should spurred them into more onslaught against the terrorists rather than attacking Nigerians in a bid to react to the criticisms.

Zulum noted that the service chiefs must embark on aggressive collaboration with armed forces in neighboring countries of Chad, Cameroon and Niger Republic who are also having their fair share of the Boko Haram menace, adding that such move would augment their efforts and ensure needed victory.

Addressing the service chiefs led by Chief of Defence Staff, Major General Leo Irabor, to Borno State, which has been at the centre of the war against Boko Haram, on Sunday, the governor urged them to enhance ties between the military and civilian population.

This, he said, would bridge trust deficit and increase military’s access to credible intelligence gathering such that would lead to their success in the fight against insurgency.

The governor also assured the military chiefs of his administration’s commitment and support to the armed forces by way of supplementing their efforts in the ongoing war.

Furthermore, Zulum urged the service chiefs to tolerate fair and constructive criticisms that might be made in good faith to enhance their productivity.

“In democratic settings, the military is an establishment which is subject to constructive criticisms by well meaning citizens. Therefore, you are expected to accept such criticisms in good faith with a view to enhancing the productivity in your operations” Zulum said.

The governor noted noted that for the Nigerian military to achieve success, there should be robust coordination and collaboration between different security operatives, particularly between the Nigerian Army and Airforce.

Zulum, however, called on the military to ensure a continued and sustained operations to deny insurgents breathing space by blocking all routes to avoid terrorist moving from one region to another.

On his part, Irabor assured that military operations would receive a boost in order to nip out the insurgents completely. He however craved the understanding of the civilian population in the fight against terrorism.