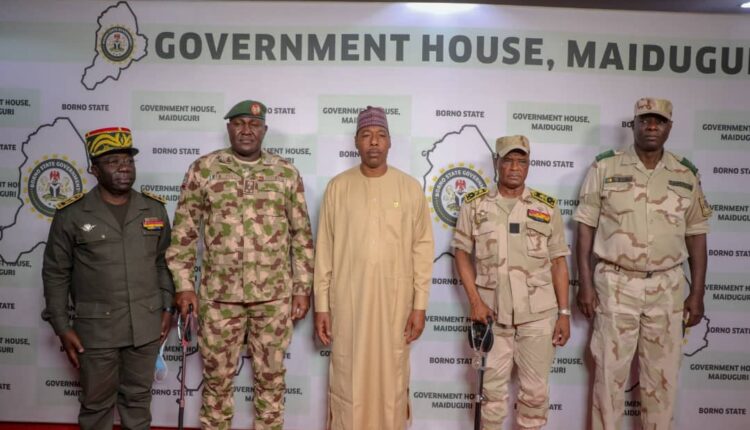 Following recent gruesome killings of 43 farmers in Borno State by Boko Haram terrorists, the state Governor, Babagana Zulum, has met with Cameroonian military delegation to re-channeled efforts toward ending insecurity in the state and protecting the Lake Chad region.

As gathered, discussion during the meeting was centered on strategies that could be adopted which would aid winning the war against the murderous set and other insurgents through strong collaboration with the Cameroonian military.

The 4th region joint military commander, General Saly Mohammadou led the Cameroonian military delegation to the meeting which held at the Government House, Maiduguri, on Thursday.

Speaking at the meeting, Saly appreciated the political support rendered by Zulum in the fight against insurgency in the Lake Chad region.

He said the support had facilitated the smooth execution of non-kinetic operations, creating conducive environment for the return of internally displaced persons and refugees to their ancestral towns.

Saly said that the Cameroonian military were in Nigeria to share experiences and improve collaboration between forces of the two countries in the fight against insurgency in the Lake Chad region.

Responding, Zulum made a case for improved trans border trade between the citizens of the two countries, adding that collaboration between Nigeria and Cameroon was important in a bid to contain the resurgence of Boko Haram in the region.

Acording to him, Nigeria and Cameroon shares the same culture and traditions, hence, the free movement of people between the two countries.

“Cameroon and Nigeria, most of our people shares the same tradition and culture. Though the insecurity has affected all the countries in the Lake Chad region, all our economies were affected. Therefore, there is need for us to come together and fight this insurgency.

“The issue of trans border trade is very important, all of us know Banki. We are doing everything possible to reopen Banki market, we are planning to reopen Bama-Banki road. Let us support the security architectures, so that we can ensure free movement of our people,” he said.