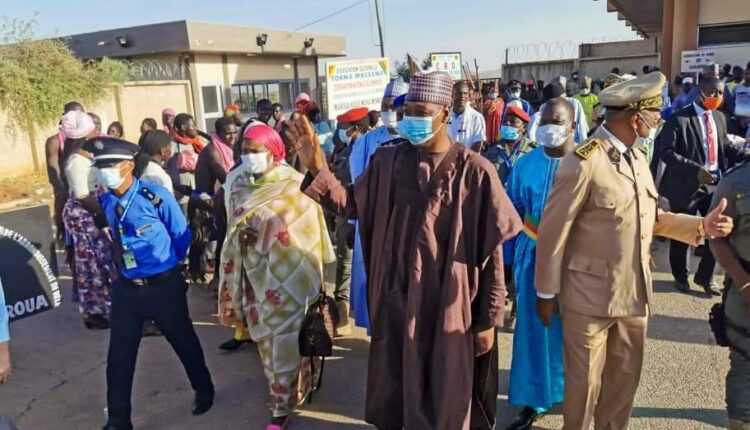 The Borno State Governor, Babagana Zulum, has led the Federal Government delegation to Republic of Cameroon to facilitate smooth voluntary repatriation of 9,800 Nigerians refugees in the country as part of government commitment to ensure safe return to Nigeria.

As stated, the 9,800 Nigerians of Borno origin are among the 46,000 Nigerians taking refuge in Minawao camp in Cameroon. The 9,800 Nigerians also constitute the first batch of citizens who have shown willingness to be evacuated to resettlement houses built by Borno Government in Bama and Banki towns.

The Zulum-led officials of Federal Ministry of Humanitarian Affairs, Disaster Management and Social Development arrived Marwa in the republic of Cameroon on Tuesday evening and on Wednesday, lead Nigerian delegation to a meeting on the tripartite (repatriation) agreement signed between Nigeria, Cameroon and the United Nations High Commission for Refugees. The Governor of Cameroon’s far north, Mijinyawa Bakare is to host the meeting.

Before traveling to Cameroon, Zulum has had series of meetings with Nigeria’s Minister of Foreign Affairs, Geoffrey Onyeama, Minister of Humanitarian Affairs, Disaster Management and Social Development, Sadiya Farouq, the federal commission, National Commission for Refugees, Migrants and Internally Displaced Persons, Senator Basheer, and with relevant ambassadors with all meetings aimed at following all established procedures towards lawful repatriation.

Zulum is in Cameroon alongside the Permanent Secretary, Ministry of Humanitarian Affairs, Bashir Alkali, and the ministry’s humanitarian director, Ali Grema, some officials from the National Commission for Refugees, Migrants and IDPs, the governor’s adviser on External and Liaison Services, Ambassador Adamu Abbas who is also a member of the Technical Working Group (TWG) established for implementation of the tripartite repatriation agreement; a member of House of Representatives representing Bama, Ngala, Kala-Balge federal constituency of Borno State, Zainab Gimba, chairperson of Borno State Emergency Management Agency, commissioner for local government and emirate affairs, Sugun Mele, Special Adviser on Projects Monitoring and Evaluation, Engr Abba Wakilbe and the governor’s Principal Secretary, Mustapha Busuguma.

As stated, the meeting was in line with provisions of the tripartite agreement which has spelt out international best practices on humanitarian issues involving movements of persons between two or more countries as well as roles and limitations of all parties, and the protection of the rights of refugees who can only be repatriated at their own will.

It was learnt that the majority of refugees at the Minawao refugee camp, who are mostly from Borno State, have regularly appealed to Governor Babagana Umara Zulum to spearhead their safe repatriation to rebuilt communities in Borno.