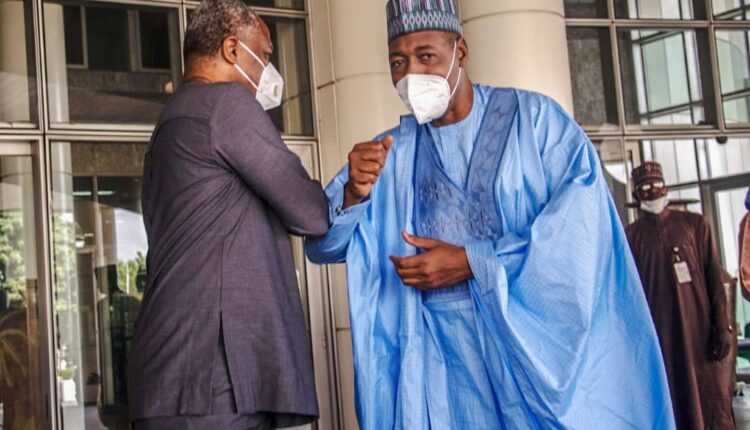 The Borno Governor, Prof. Babagana Zulum, has met with Nigeria’s Minister of Foreign Affairs, Geoffrey Onyeama, to conclude intergovernmental efforts for voluntary repatriation of thousands of Borno citizens currently taking refuge in parts of Cameroon, after fleeing from Boko Haram attacks within the last six years.

As stated, the meeting which held at the Federal Ministry of Foreign Affairs in Abuja, was a follow up to Zulum’s series of meetings with minister of humanitarian affairs, disaster management and social development, Sadiya Umar Farouk, top exeqcutives of the National commission for refugees, migrants and internally displaced persons, the United Nations High Commission for Refugees, UNHCR, among and other stakeholders.

It was learnt that the ministry’s role which include facilitating repatriation of refugee through diplomatic channels were discuss during the Thursday meeting, which held behind closed doors, with promise to begin the repatriation process in January 2021.

The meeting was attended by Nigeria’s serving Ambassador to China, Amb. Baba Ahmad Jidda, who was there as a statesman from Borno state.

More than 60,000 Nigerian refugees, majority from Borno and some from Adamawa states are believed to be in Minwao camp in Cameroon, which Zulum had visited and supported with social protection relief.

The governor has also approved ongoing construction of thousands of houses in which repatriated refugees would be permanently resettled in safe communities.

Meanwhile, Zulum recently visited Chad Republic where he was hosted by President Idris Deby to discuss repatriation of thousands of Nigerian refugees, majority from Borno. The meeting, held at the presidential palace, was attended by Nigerian ambassador to Chad, Zannah Umar Bukar Kolo, who represented Nigeria’s federal ministry of foreign affairs.