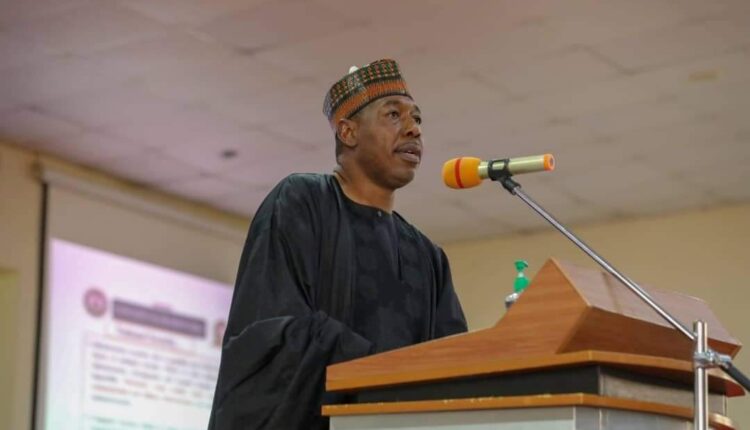 The Borno State Governor, Babagana Zulum, has faulted alleged regional tag he claimed was been placed on insecurity challenges across the country, saying issues of insecurities in Nigeria remains a collective problem.

He explained that contrary to claims that the northern regions, particularly the northeast zone were only zones being bedevilled by the challenges, the resultant effect were being felt across the country and thus no region was immune from the crisis.

The Governor noted that it was pertinent that Nigerians, irrespective of tribe, religion and political affiliations begin to view issues of insecurity as collective challenges and rise in unison to muster the right political will in waging war and defeating Boko Haram and other terrorist groups.

Speaking earlier in the week during his lecture at the National Institute For Security Studies in Abuja, Zulum who deliver a paper titled “Promoting National Security and Sustainable Development: Borno State Experience” said that his experience at the helms of affairs has shown that there was need for unity to defeat terrorism in Nigeria.

According to him, poor governance, weak institutional capacity, and mismanagement of resources are the major problem of Nigeria, part of which led to formation of Boko Haram with their activities across the country.

Zulum noted that national security and sustainable development are two sides of the same coin, adding that without security there would be no development.

The Governor said that for Nigeria to attain sustainable national development and security, there was need for commitment from both leaders and the led across the country.

He also attributed the crises in most parts of the country to obsolete, inadequate equipment and military personnel, stressing that while other countries were deploying artificial intelligence and other forms of technologies to strengthened security architecture, Nigeria was still digging trenches to protect citizens.

“The insurgency is not our problem alone, let’s act or it consume us all. There is an increasing budgetary allocation to security since the beginning of this crisis, the resources which we should have ordinarily invest in developing our infrastructure is now shifted to the security sector. You see it affect all of us either directly or indirectly,” he said.

The Governor lamented that the insurgency has forced Borno citizens to become unproductive, adding that many have completely lost their means of livelihood as effect of incessant attacks by bandits and terrorist groups.

“It is pity when others are talking about educational development, infrastructure development at the rural areas, we struggling to feed our people,” he added.

Financial expert drags Tinubu, others before court over money laundering