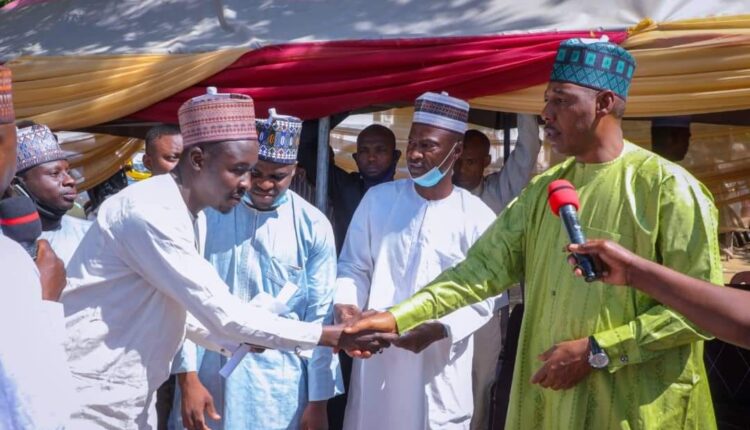 As part of measures aimed at boosting small businesses and stimulate local economy of Borno State, the Governor, Babagana Zulum, has disbursed N154 million to to 704 small and medium entrepreneurs across the state in mitigating effect of insurgency on enterprises.

He indicated that the incentives was in line with his administration’s commitment to support businesses owners to be self-sufficient and become employer of labour which would in turn reduce poverty statistic across the state when youths are gainfully employed.

Distributing the incentives on Sunday, Zulum noted that his administration would stop at nothing in supporting initiatives that would empower citizens across the state toward ensuring accelerated development.

Briefing journalists after the exercise, the governor promised that more would be done by his administration’s to support and empower the citizens across the state.

“We want to empower them, you are aware that many of our people have completly lost their means of livelihood as a result of the insurgency.

“Empowerment is one of the items in our 10 pact agenda, so in fulfillment of our campaign promises we have to empower our people so that they can be gainfully self-employed.

“I appeal to the beneficiaries to make judicious utilization of the little we have given them so that it can grown and make some impact,” Zulum said.

The distribution which took place along Damboa road saw 304 persons in small businesses received N50,000 each, and at Kulo Gumna which 400 more, benefited the same N50,000 each. Both places are in Maiduguri.

A total of N35.2 million naira was disbursed to entrepreneurs in Sunday’s exercise. Before it, N75 million was earlier distributed to cola nut sellers, N20 million to traders around dandal and another N24 million to traders operating around customs round about in Maiduguri. Each of the beneficiaries also received N50,000 to boost their small businesses.

At the Sunday’s programme, Governor Zulum charged the beneficiaries to make proper use of the empowerment package given to them, adding that the disbursement was in fulfillment of his campaign promises to the people.

Before Zulum’s distribution, the General Manager, Borno Renaissance Microfinance Bank, Dr. Bello Ibrahim, said over N1 billion has been disbursed within one year, to various clubs and associations.

In December 2019, N384m was distributed to empower street beggars while in January 2020,
N515m was disbursed in ‘cash for work’ programme in which 2,862 members “Ecomog”, an outlawed political political thuggery group, were paid N30,000 each month for a half of the year. The youths received payments for cleaning the streets.