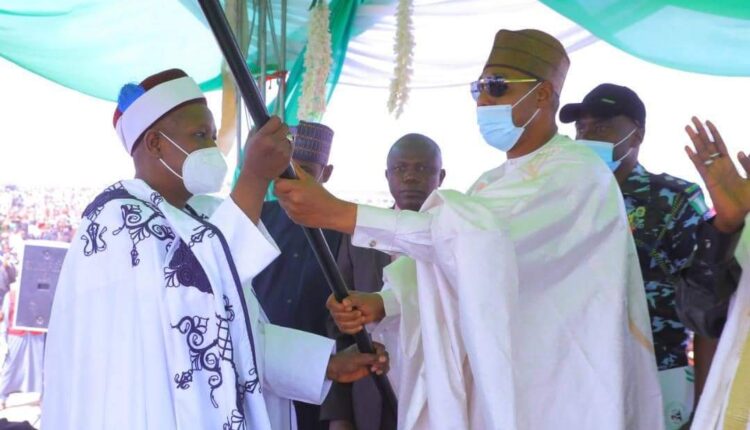 The Borno State Governor, Babagana Zulum, has commended the military over its presence in the state and recent offensive against Boko Haram members and other terrorists in Borno and other northeastern states.

He noted that their renewed attack against the enemy, particularly taking the fight to their enclaves which rendered the insurgents incapacitated was a major breakthrough for citizens across the state.

Zulum added that the degrading of the insurgents has greatly boosted trusts and augment his administration repatriation and resettlement plans, and that such was coming at the right moment for the benefits of the people and state at large.

Speaking yesterday when he presented staff of office to the recently appointed Emir of Biu , Mai Umar Mustapha II, the governor noted that the recorded gains by the military was in line with his administration’s 25-years post-Boko Haram development plan.

Furthermore, the governor hailed the Nigerian Armed Forces, other security operatives, vigilantes and members of the Civilian Joint Task Force (CJTF) on the recent successes been recorded in the fight against insurgency in Borno, saying without their efforts, it would have been hard for peace to reign in the state.

“May I use this medium to commend the federal government and in particular the Nigerian Military for the recent successes they have recorded in the fight against the insurgents. Especially by taking the war to the enclaves of the insurgents, let me commend the Chief of Army Staff, the Chief of Air Staff, directors and principals in the military high command, the theatre Commander, the GOC, sector commanders, brigade commanders, commanding officers, men and officers in theatre of operation, the police and all other security operatives working in Borno for the support they have rendered in securing the territorial integrity of our nation.” Zulum said.

Speaking on Mustapha II, the 29th emir of Biu who was appointed after the dimise of his later father on 21st September 2020, the governor urged the monarch to uphold the tenets which make the stool a revered one.

Presenting the Staff of Office, the Gov. Zulum said, “The historical antecedents of Bura/Babur and other tribes in Borno are not only intertwined but two sides of the same coin. We are one people united by different historical events.”

He charged the new Emir to consolidate the foundation put in place by his late father Mai Umar Mustapha Aliyu by been just and fair, adding that he must carry everybody along and sustain the development in education, health, agriculture, security of his people.

The colorful occasion which took place at Biu central stadium had in attendance, the deputy Governors of Borno and Gombe, Shehu of Borno, Alh. Dr. Abubakar Ibn Umar Garbai Al-Almin El-Kanami, other emirs from Borno and the neighbouring states, the Chief of Army Staff, Lt. General Tukur Yusuf Buratai.