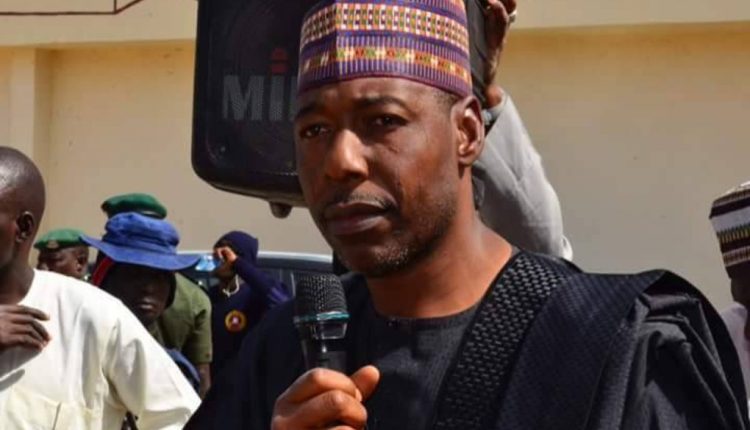 Share
The Governor of Borno State, Babagana Zulum, has approved the construction of a new mega secondary school in Pulka, Gowza Local Government and distributed food packages to residents displaced by insurgents.
Over 20,000 Internally Displaced Persons (IDPs) and residents of Pulka benefited from the varieties of food and non-food items distributed by the government to cushion the effect of economic challenges.
Zulum gave approval for the construction during his visit to Pulka, a border community, to access destroyed schools, hospitals, and other facilities damaged by insurgents including challenges confronting residents especially IDP.
The Governor, who had earlier traveled to Kala-Balge, Ngala, Marte, Dikwa, and Mafa Local Government Areas, was directly involved in the distribution of food items to more than 10,000 displaced and vulnerable citizens.
While issuing different directives on deadlines for completion of ongoing projects and the start of farming activities in the state, he extends appreciation to the President and Commander in Chief of Armed Forces, Muhammadu Buhari, Federal Ministry of Humanitarian Affairs, Northeast Development Commission, National Emergency Management Agency (NEMA) and Dangote Foundation for their enormous contributions of food items to the state government.
Before departing for Maiduguri, Zulum traveled to Kirawa, another border community in Gowza Local Government Area, to access public and private buildings destroyed by Boko Haram insurgents, and on arrival, thousands of Kirawa residents that were taking refuge in the Republic of Cameroon crossed into Nigeria, seven years after they were forced out to the neighbouring country.
The Governor assured of his administration’s commitment to return them. He noted that Borno State Government is liaising with the Nigerian military to explore the possibility of returning people back to Kirawa.
“We are here purposely to examine the security architecture of this very important town, Kirawa. We have started interfacing with the Nigerian Military with the view to resettling the people of Kirawa. But the most important thing we have to do now is to ensure minimum security in the town.”
“As far as the Government of Borno is concerned, you can see the commissioner of RRR is here. We are ready and committed to ensure people are resettled into this community”, Zulum said.
In addition to Kirawa, the Governor stated that Government is equally looking at the possibility of returning people to Ngoshe, Warabe, Ashgashiya, and Hambagda all in Gowza Local Government Area.