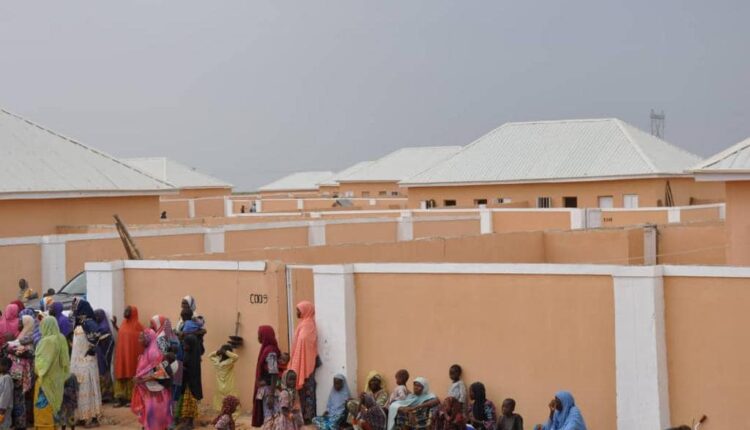 Borno Governor, Prof. Babagana Zulum, has commissioned 580 units of two-bedroom houses and immediately allocated the property for resettlement of families displaced by Boko Haram who had, for years, been living at Internally Displaced Persons (IDPs) camp.

He explained that were allocated to the IDPs in line with his administration’s commitment towards safe and dignified resettlement for the IDPs across the state.

Zulum unveiled the houses on Wednesday in Auno town of Konduga Local Government Area of Borno at a brief ceremony that was attended by government officials, the district head of Auno, among others.

During the ceremony, the governor symbolically presented letters of allocation to families and directed the resettlement committee to work towards moving more displaced families from IDP camps to dignified homes.

Zulum lamented that IDP camps have been faced with so many problems, including prostitution, drug abuse, and exploitation of humanitarian interventions by citizens who relocate to camps in the daytime mainly to get food rations meant for those with more severe needs after which they return to their homes at night, leaving the real IDPs with fewer food allocations.

The governor said that it was in that regard that he directed the closure of government IDP camps at the Mohammed Goni College of Islamic Legal Studies (MOGOLIS) and the NYSC permanent orientation camps, while displaced persons were resettled.

In his welcome remark, the state’s Commissioner for Reconstruction, Rehabilitation, and Resettlement (RRR), Engr. Mustapha Gubio, explained that a total of 4,967 families, called households, were recently resettled with houses allocated to them in Damasak, Auno, Bama, Konduga town, Jere, Maiduguri, and Marte.

Gubio also said that during house allocations, primary school teachers, nurses, and security personnel were accorded consideration given their roles in communities.