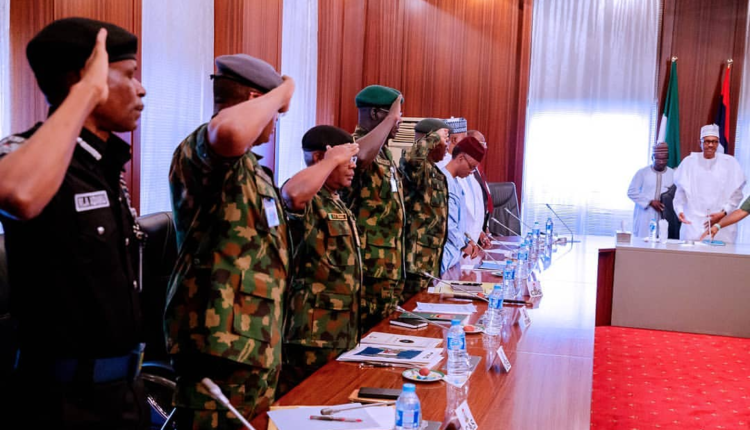 After several minutes of deliberation behind closed doors, the security meeting between President Muhammadu Buhari, the nation’s service chiefs and the Inspector General of Police has ended.

Aside from the Chief of Army Staff, Tukur Buratai, who was absent, other officers including some executive members were present at the meeting where the President was briefed on condition of security in Nigeria especially the murder of 12 Christians by insurgents.

Confirming what transpired during the meeting on Monday, Chief of Naval Staff, Ibok Ekwe Ibas, said President Buhari has been briefed on the country’s security profile in 2019.

Briefing newsmen after the meeting, the Naval chief stressed that security agencies have intensified efforts to ensure Nigeria remain safe, especially as most parts of the country enjoyed a peaceful yuletide.

He disclosed that within two weeks the military was able to repel no fewer than 27 terrorist attacks carried out by the Islamic State of West African Province, ISWAP in the North-East part of the country.

Ibas, however, said there is an ongoing collaboration with regional partners to contain the renewed threat from ISWAP and handover towns reclaimed from terrorist groups to civilian authorities for property management.

Others are the Director-General of the Department of State Services, Yusuf Bichi, Secretary to the Government of the Federation, Boss Mustapha and National Security Adviser, Babagana Monguno.