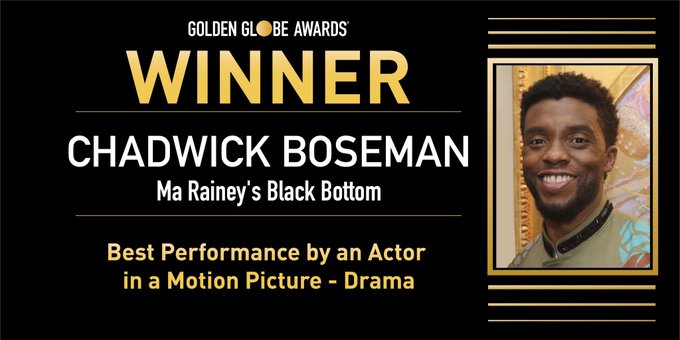 Hollywood late actor, Chadwick Boseman, has been voted Best Actor in a motion picture drama category at the 2021 Golden Globe Awards, pipping four other actors to win the award potshumously.

The four other actors nominated for their performance over the years in the industry were Riz Ahmed in Sound of Metal; Anthony Hopkins in The Father, Gary Oldman for his role in  Mank, and Tahar Rahim in The Mauritanian.

Boseman, who was posthumously nominated for his performance as Levee in a blockbuster drama, Ma Rainey’s Black Bottom by the organisers of the 78th annual Golden Globe Awards, announcement as winner drew an emotional moment during the ceremony.

The award held came barely six months after Chadwick, who was described as an inspiration to the current generation, passed on at the age of 43.

Boseman’s award was accepted by the late star’s wife, Simone Boseman, whose speech further brought a lump in the throat of every black Panther fans globally including multi-award-winning actress, Viola Davis.

An emotional Simone fought back her tears while saying, “He would say something beautiful. Something inspiring. Something that would amplify that little voice inside of all of us.”

As she strive harder to hold back tears during her acceptance speech, millions of the actor’s fans watching Simeone could also not help but loose guard and she tears over Chadwick’s demise.

The fans could not help but miss Chadwick once again and wished he was alive to accept the trophy himself and speak to them as he did after winning several awards for his role in Blank Panther.

Following the emotional speech delivered on behalf of the late husband, the social media platforms were once again flooded with his memories and messages honouring his performance on the screen.

Boseman, a native of South Carolina who began his screen career in episodes of television dramas, was confirmed dead through a statement on his official social media accounts that further stated that he passed at his home in Los Angeles, United States, with his wife and family at his side.

The statement added that Boseman was diagnosed with stage 3 colon cancer in 2016, an illness that progressed ultimately to stage 4 and went publicly undisclosed until his death, though he had grown noticeably thin in recent public appearances.

Dangote declares over N53bn profit in sugar, increases production by 13.7%