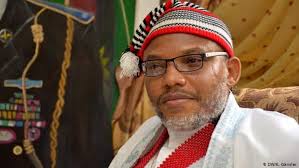 Leader of the outlawed Indigenous People of Biafra (IPOB), Nnamdi Kanu, has disclosed that he will be leading the organisation to a vital meeting with United Nations (UN) officials in Geneva, tomorrow.

Kanu said that the international community is fully aware of the plight of Biafrans in the hands of the “terrorist Nigerian government.”

IPOB leader, who made this known via his Twitter account on Sunday, said: “I’m looking forward to leading the Indigenous People of Biafra to a vital meeting with United Nations officials in Geneva, Switzerland on Sep. 17, 2019.

It would be recalled that the outspoken activist presented a paper at the European Union (EU) Parliament in Brussels, Belgium last Tuesday – on invitation.

There, he slammed Nigeria as “the problem”, while also accusing President Muhammadu Buhari’s administration of unfairly branding IPOB a terrorist organization.

Afterwards, he revealed his desire to head to the UN, adding that the quest to restore Biafra is ‘unstoppable’.