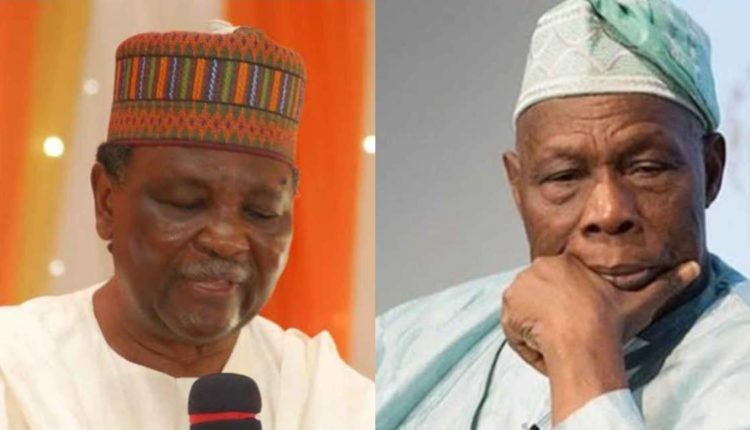 A new group known as Customary Government of the Indigenous People of Biafra, (CG-IPOB), has dragged former Head of State General Yakubu Gowon, rtd, former President Olusegun Obasanjo and Attorney-General of the Federation to a Federal High Court sitting in Enugu.

In suit No. FHC/EN/CS/103/2019, coming up on October 2, 2019, the pro-Biafra group wants the court to decide on issues relating to self-determination, regional autonomy, and roles the respondents played during the civil war, referendum, among other things.

The group also wants the court to determine issues bordering on the enforcement of rights of ‘Biafrans’ in their lawful pursuit for self-determination, referendum and right to establish an autonomous Biafran State within the Nigerian State as practiced by the Scots in the United Kingdom.

The CG-IPOB, which is being led by Anambra-based lawyer, Emeka Adolf Emekesiri, in an ex parte application,  sought the leave of the court and jurisdiction to commence a suit against the defendants who were ex-Head of State, President of Nigeria and Attorney General and Minister of Justice of Nigeria.

In an originating summons, the plaintiff is praying the court to determine whether the instruction given to members of the claimant by President Muhammadu Buhari, on March 5, 2016, on Al Jazeera Television that it should organize themselves and vote to have a State within a State which the group said it had accepted and complied with by organizing themselves, had created an obligation on the defendants from which the defendants could no longer withdraw.

The group also asked the court to determine whether by the instruction of the defendants which the members CG-IPOB had accepted and complied with as aforesaid, now had the right to conduct their referendum and vote to have its State of Biafra as a self-governing autonomous region within the Nigerian State, just like Scotland governs itself within the United Kingdom of Great Britain.

“Whether, notwithstanding and in the absence of any directions, instructions, promises or offers from the defendants, the applicants have the legal and inalienable right to self-determination pursuant to Articles 19 – 25 of the African Charter on Human and Peoples’ Rights (Ratification and Enforcement) Act, Cap A9 Laws of the Federation of Nigeria 2004 (Cap 10 LFN 1990).

“Whether it is an offence and unlawful contrary to any provisions of the Constitution of the Federal Republic of Nigeria 1999 or of any other law whatsoever for the remnants of the Biafrans who survived the war with their descendants to identify themselves as Biafrans by indigenous identity, and display their native flags and emblems and Biafran trademarks on their properties and products as they do now whilst remaining loyal to the Government of the Federal Republic of Nigeria as Nigerian citizens.

“Whether it is lawful for the Defendants to harass, molest, arrest and detain the applicants for identifying themselves as Biafrans with their native emblems.”

Other things the group also wants the court to decide are: “whether the amalgamation of the applicants with the peoples of other ethnic nationalities in the South and North by the British Government to form one country called Nigeria was with the consent and agreement of the indigenous peoples of the lands.

“And if the answer is in the negative, whether the Order-in-Council 1910 – 1913 made by the British Government to create Nigeria in 1914 was null and void ab initio for lacking legitimacy as it could not form the basis of the Nigerian Constitution thereby, rendering the amalgamation invalid.

“Whether by the Constitution of the Federal Republic of Nigeria 1963 which took effect on 1st October 1963 and remained in force until midnight of 30th September 1979, the defendants were right to seize and confiscate the assets, properties, money, and all the treasures belonging to members of the claimant by promulgating the Abandoned Properties Act of 28th September 1979, while the 1963 Constitution was in force, being more than nine years after the war and after the declaration of “One Nigeria” while regarding members of the claimant as Nigerian citizens but depriving them of their properties, money, and assets.

“And if the answer is in the negative, whether the defendants are still justified to withhold the said money, properties and assets belonging to members of the claimant.

“Whether the defendants were justified to violate the International Humanitarian Law and the Laws of War known as the Geneva Convention 1949 (to which the defendants acceded to and ratified on 20th June 1961) by bombing the Biafran civilians, killing the Biafran civilians and using starvation to kill the children, women and the elderly of the civilian population of the indigenous people of Biafra in the war of 1967 – 1970 in order to win the war.

“Whether the right of self-determination provided under Article 20 of the African Charter on Human and Peoples’ Rights (Ratification and Enforcement) Act overrides and supersedes the provisions of Sections 1 and 2 of the Constitution of the Federal Republic of Nigeria 1999 pursuant to the Judicial Authority in the case of IGP v ANPP (2007) 18 NWLR (Pt. 1066) 457 at 500, Para B–C.

“Whether it is lawful for the defendants to marginalise, persecute and discriminate against the claimant’s region of the South East and South South of Nigeria by refusing to develop their region, refusing to revamp their seaports, refusing to dredge their River Niger and other inland Rivers to the sea, and threatening to shut down or downgrade their International Airport at Enugu.

“Whether the Defendants by registering Nigeria as a member of the Organization of Islamic Countries (OIC) in 1986 and licensing an Islamic Sharia Bank in Nigeria under the 1999 Constitution contrary to Section 10 of the Constitution of Nigeria have violated the Constitution and turned Nigeria into an Islamic country; and if the answer is in the affirmative, whether the members of the Claimant have the right to dissociate themselves from the Defendants and refuse to be called the citizens of an Islamic country in the exercise of their right to freedom of worship, freedom of association and self-determination as a people.”