Beyond Tinubu and APC Presidential Primary 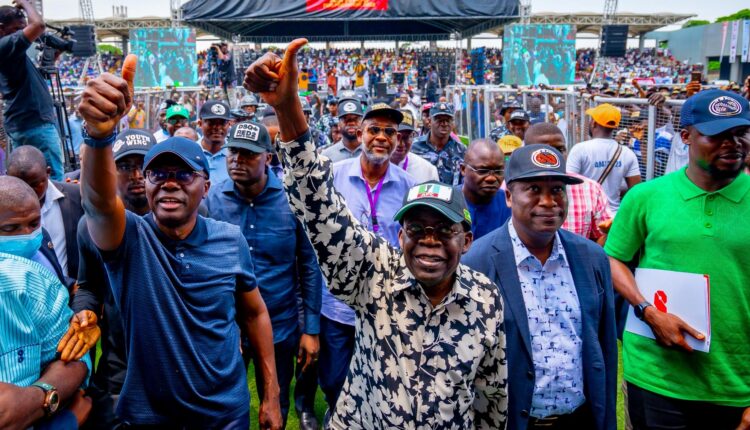 What our elite should understand about politics in this country is that it involves every class of people not just the educated or the rich.

They must see beyond themselves and their votes that this politics involves youth that are not in the university and other tertiary institutions. That Nigeria democracy is beyond social media enthusiasts who only criticise with no PVC.

That this politics includes commercial bus drivers, auto mechanics, plumbers and traders who see voter’s card as source of income rather than power to elect a leader.

A vulcanizer at the roadside thinks more of the daily pay that will put food on his table than the promise of a better future, which may never happen. His brain has been conditioned that way due to years of disappointment and neglect by the government. He has a mini generator. He had built a two-room apartment in a village at Abule Oba and had dug a borehole to get potable water.

He has cut himself out of the government except his children’s education. It is poor education for poor children. So, he waits for political largesse during electioneering, nothing more.

For an educated fellow, especially an unemployed graduate, he has hope in his certificates that perhaps a good government will be elected one day that will fix the problem of unemployment. So he thinks more about the various presidential aspirants on the bases of their competence and sincerity. He wants a better future even though he is hungry. His education makes him to think out of the box.

These are the factors that had determined the outcome of successive elections in this country. Winners of such elections must have done a lot to bring together all these datas to arrive at a winning formula.

I urge the aristocrats among us to take time and interact with this lower class so as to feel their power and their own conviction about politics and politicians.

They will see that after foods and drinks, these set of Nigerians cherish their street language more than anything. They are comfortable when a corporate person speak their language than giving them food to eat. They dislike man who forms his character and listen to men who easily fraternise with them.

Saturday’s rally at Onikan Stadium was a good example . It was organised by Tinubu’s allies but I must say here that not all the crowd had come to listen to Tinubu, most of them at the place came to listen and dance to the Fuji star, Wasiu Alabi Pasuma.

They had come to learn new street language but Tinubu had used the opportunity to sensitise them about the coming election, why they will need to revalidate their PVC and vote for him as the next Nigerian president.

He engaged them in both street and civil languages to sell his agenda, using Pasuma as a purveyor of his message.

Music is an international language and a medium to pass information. I could remember growing up and listening to foreign hip hop music. It was a culture for us then to memorise the lyrics so that we could mime it among friends.

The ability to mime then, created leverage for us in some social gatherings, just as the present Fuji and Afro pop fans who will always troop to where their singers will perform. Tinubu group will have to organise another one to capture the hip hop fans many of whom are social media trolls.

At the gathering, the former Lagos Governor refreshed his Lagos sense. He engaged the youths, using the language they understand. They were happy and promised to befriend their PVC for BAT election.

This is the same Tinubu who engaged former speakers of states houses of assembly earlier in the week where he exhibited greater intellectual capacity to sell his agenda. He is naturally intelligent and can engage any class of people. That is a big strength.

To many of his traducers, Tinubu is working in vain because APC will disappoint him. Their prayer is that the party should pick its candidate by concensus even if it is unconstitutional and it should not be Tinubu but someone else.

To them, the people at Onikan were rented crowd but those at their candidate’s rallies were real supporters.

But for me, position should be contested and voters must be sensitised and convinced by aspirants about their agendas. In this Tinubu is steadily becoming a movement even before APC presidential primaries.

Kunle Awosiyan is a journalist based in Lagos