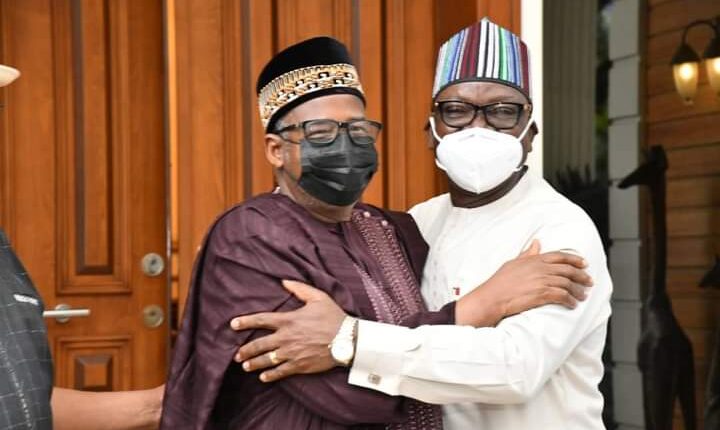 The acrimony between Benue State Governor, Samuel Ortom, and his Bauchi State counterpart, Bala Mohammed, has been resolved with both reconcilinged and immediately chided All Progressives Congress (APC) led Federal Government for fueling the farmer-herder tension across Nigeria that resulted in the face-off between them.

Both Governors, who assumed office on the platform of the Peoples Democratic Party (PDP) argued that there was a need for the apex government to accept its deficiency in leadership and seek support to address the security challenges that have crippled activities within the country.

In an interview with journalists on Tuesday after the meeting held at the Rivers state Governor, Nyesom Wike’s private residence at Rumuepirikom, which was also attended by the Adamawa State governor, Ahmed Fintiri, both formerly aggrieved governors commended Wike and Fintiri for their effort to end the face-off that had generated reactions across the country.

Mohammed said the outburst between him and Governor Ortom over herders/Fulani profiling was highly regrettable and disclosed that they allowed the argument that started at the Nigerian Governors Forum (NGF) to extend beyond the forum.

The Bauchi governor noted that the face-off between them has been resolved and that they were ready to collaborate and bring development to the country.

He said: “I want to seize this opportunity to tell Nigerians that whatever misconception that is there, that I and my brother Ortom are having problems or anybody in Nigeria is not true. What happened was just an explanation that emanated from a larger Governors’ Forum that we spoke on the security of the nation and we talked of the failure of security infrastructure which everybody knows is under the purview of the federal government”.

“We have accepted that it was wrong for us to have that kind of outburst that went out, but as from today, we have learnt. We are all fallible human beings and we are subject to mistakes and so when we make mistakes, it is a plus for us if we correct them. And I think moving forward, we shall live together. The Fulani and Tiv people have cohabitated for a long time and there is no issue whatsoever.

“We look forward that the federal government should stoop down to conquer by accepting that, yes, they have failed, so that together the State and the local government can come together to find a way of finding a lasting solution to this country

“As of today, there is no equity, there is no fairness, there is no justice in our country and that is why everywhere in Nigeria there are issues. So we look forward that the Federal Government will partner with us. This time we need not talk about partisan politics. We must come together. We need not talk about ethnicity or religion. We must come together as brothers and sisters who have no other country than Nigeria, to work together towards a common cause that will solve the problem that we have,” he added.

Speaking on the meeting, Wike stated that he and Fintiri waded in to address the issue to prevent the alleged incapacity of the Federal Government in handling the issue of insecurity in the country to rub on them that have been effective in their constitutional responsibility.

“Everybody knows that the Federal Government has failed in providing security for this country. And of course you will not blame them. They (Ortom and Mohammed) are under pressure from their various States. It is not as if they have any personal issue.”

The rivers state governor noted that the opposition party, APC, would be disillusioned realising that the face-off between both governors have ended and they were ready to ensure development in their states.