Borno varsity staff to get housing loan, other financial… 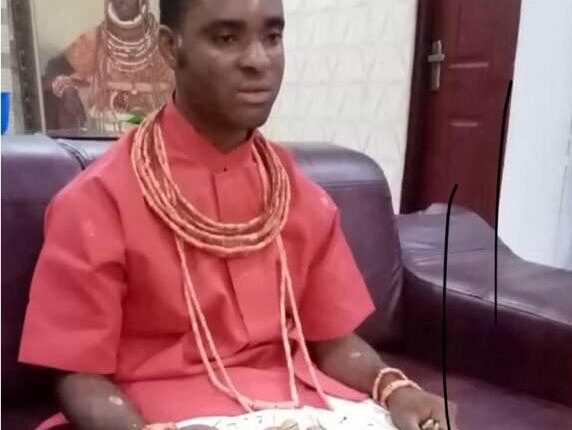 The Oba of Benin, Omo N’Oba N’Edo Uku Akpolokpolo, has suspended one of his key aides, Roland Ogbebor, indefinitely after been alleged to have swindled an Austrian-based Nigerian, Benedict Ehiamentalor, of N3.5million paid for a parcel of land in Edo State.

Ogbebor’s suspension, according to the monarch, was to distance the palace from the fraud allegations and to aid the anti-graft agency and Nigerian Police to complete their investigations without any hindrances.

The suspect’s suspension came over two months after Ehiamentalor alleged that the monarch’s suspended aide and two others, Otasowie Glory and Osaretin Otasowie, who was said to be a pastor, collected the sum from him and did not fulfill their promises.

Through a statement released by Benin Traditional Council’s secretary, Frank Irabor, the monarch assured the public that the palace would not involve in any illicit act.

“This is to inform the general public that recently, the EFCC and Police opened an investigation on petitions written against Roland Ekhoe Ogbebor, former Odionwere Omuada who was charged in November 2018.

“In order to allow unhindered investigations by EFCC and the Police , His Royal Majesty, Omo N’Oba N’Edo Uku Akpolokpolo, Ewuare II, Oba of Benin has directed the immediate suspension of Roland Ekhoe Ogbebor from the Palace”, the statement added. 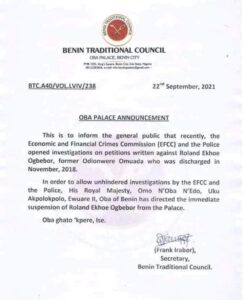 Worried by the actions of the three suspects, the Austrian-based Nigerian, through his lawyer, Samuel Abasilim, petitioned the As­sistant Inspector General (AIG) of Police, Zone 5, Benin City and claimed that the two others introduced him to Ogbebor for purchase of land.

In the petition, Ehiamentalor claimed that weeks after the transaction was concluded, the people became eva­sive and were no longer picking his calls.

The legal practitioner, who spoke on behalf of the Australian-based Nigerian, claimed that he was to be given a100 feet by 200 feet land along the ex­pressway by Eyaen quarters to com­pensate for a friend he described as es­tranged lover, who he said was plotting to seize the land where the petitioner was already erecting a building.

According to the lawyer, The trio has capitalized on the fact that our client was in Nigeria for a brief period which was why they manipulated the whole sce­nario for our client to travel back, hoping that it would be the end of the criminal deceit to obtain all the large sums of money from him.

After the payment was made on the 23rd of December, 2019 into a company’s account of Hardrow construction Nigeria limited at Sterling bank, account number 0068207275 as instructed by Rowland Ogbebor. ” Specifically, Rowland Ogbebor instructed that the sum of #3million be paid into this account and this was effected through first Bank fund transfer on 23/12/2019.

Thereafter, a Deed of transfer was drafted between Ogbebor and Ehiamentalor the “.Petitioner on payment, requested to see the said land since Ogbebor said the land was just 400 metres from Auchi -Eyaen road but it turned out that the said land was remotely located, not as promised by the Rowland Ogbebor.

“Several weeks after the transaction was concluded, Rowland Ogbebor who resides at Edosowan Joseph street, off Hon. Zakawanu Garuba street, Ebo quarters, Benin City and works at the Oba of Benin palace as one of the high ranking officials to the Benin monarch, became evasive and was no more picking calls”.

According to the petition, the 100ft by 200ft parcel of land could not have been worth N3 million, therefore, the petition requested a refund since the land was not as agreed by both parties. The petitioner said all efforts to get a refund from Ogbebor was proved abortive, hence, a formal complaint was made to the police.

The petitioner, who petitioned Ogbebor through the chambers of Samuel Abaslim &co, said in the petition that ” our client was later to trace the residence of Ogbebor which was surprising to him and he subsequently pleaded to be given time to settle the issues but all the while he was posting our client till date”.

According to the petitioner, Ogbebor capitalised on the fact that Ehiamentalor Victor Benedict was in Nigeria for a brief period of time, which is why he manipulated the whole scenario for him to travel back and hoping that it would be the end of the deceit to obtain the money from him.

In the petition by the counsel to the petitioner, Abaslim, he said from January 2020, it became clear to his client that he had been swindled and reaped totally bare financially and emotionally. He said several attempts have also been made by persons to get me Ogbebor to refund the money for the parcel of land but to no avail, as Ogbebor did not leave up to his promises to refund the money.

On invitation by the police, based on the petition written by Ehiamentalor, Ogbebor signed an undertaking at the office Of Assistant Inspector General of Police, Zone 5, to return the sum of #3m which he later reneged.