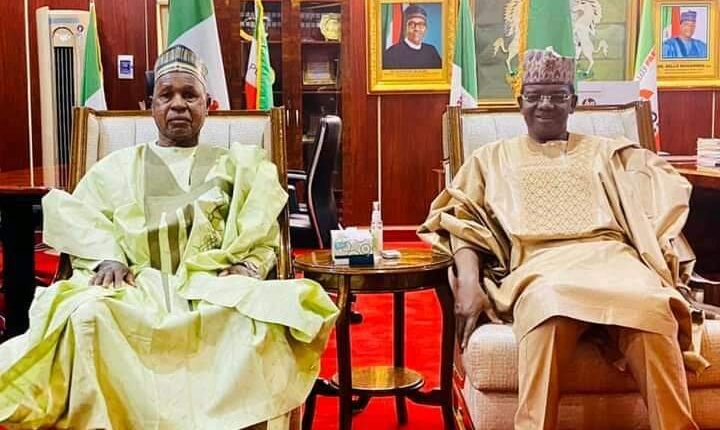 The Governor of Katsina State, Hon. Aminu Bello Masari, was in Gusau this afternoon. He was specially chosen by His Excellency, Dr. Bello Mohammed to commission the newly re-modeled State Legislature named after the late Chairman of the Peoples Democratic Party, Alhaji Ibrahim Mallaha. For 23 years, the Legislative arm of the Government in the state had operated under the very rickety and dilapidated structure. The second Arm of Government and the main symbol of democracy is now proud to have a befitting edifice with its mace smiling and ready to ooze out benevolent authority.

With the above narrative, who else is more befitting to commission this edifice than Masari? For one, his state is one of the immediate neighbors of Zamfara state. Secondly, he is considered by His Excellency, Dr. Bello Mohammed as an elder brother. And thirdly, and very importantly, he was the Speaker of our National Assembly at one time and a leader to Governor Matawalle who was also a three-term Lawmaker at the National Assembly.

The occasion was superlative, rosy, and a smashing success. It started well and ended up well. Governor Masari climaxed his visit by commissioning one of the 18 Governors’ Chalets built inside the Government House by the Matawalle administration. He commissioned the Katsina House, a four-bedroom Chalets dedicated to the Katsina state Governor and his officials whenever they are on official assignment in Zamfara State.

But what stole my attention from the whole event was born out of the speech delivered by the Katsina state Governor who hammered on the security situation in the North West Zone. He fundamentally touched the very center point of Matawalle’s heart in terms of governance and the need to deliver a true democratic dividend that is premised upon peace and tranquility. He emphasized the need to come together as one and deal with the problem with one voice and one weapon.

However, the Devil, they say, never rests. The Governors ended up in disarray of policy harmony afterward as each party finds its way all alone. Kaduna State Governor openly opposed Matwalle’s policy in the media. Even his elder brother, Masari, subtly went loggerheads. At a point in time, the Niger state Governor went difficult to comprehend as well. The bandits noticed the conflict among the Governors and at one time, they capitalized on it and the result was very bad indeed.

However, today, the speech made by His Excellency, Governor Masari, at his own choice and volition, was re-assuring which shows that he and Matawalle are perfectly on the same page now as to the fight against banditry in their two states. I remember that a similar scenario played out when Governor Matawalle visited his other elder brother, the Kebbi state Governor Alhaji Atiku Bagudu some two weeks ago. The calm synergy existing in the relationship could not be missed at all.

Now at least, the Governors of Katsina, Sokoto, Kebbi , Zamfara, and Niger states are in harmonious understanding on the fight against banditry. With this kind of positive developments taking place, we hope the Devil will finally be shamed and that the entire North West Governors will come to the table and speak to themselves with one voice so that the fight against the agents of the Devil will be won and our people will be freed from decade long of banditry and wanton death.

Zailani Bappa is the Special Adviser to the Zamfara governor on Public Enlightenment, Media, and Communications.