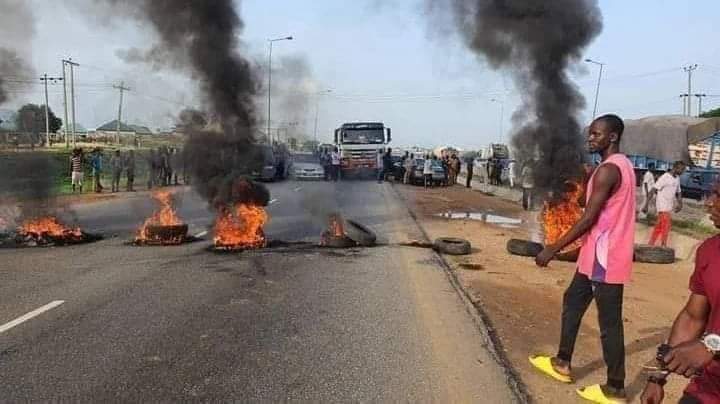 Atleast 13 structures including six houses and seven shops were set ablaze and dozens of people sustained varying degrees of injuries during a protest against an alleged blasphemous message disseminated on different social media platforms by a 40-year-old lady, Rhoda Jatau, in Warji Local Government Area of Bauchi State

It was learnt that among the injured residents, three persons sustained gunshot wounds after they were shot by the youths with Dane guns for kicking against demonstrations.

Confirming the demonstration and number of property vandalised, the spokesperson for Bauchi Police Command, SP Ahmed Wakil, said that efforts had been intensified to restore normalcy across the troubled council.

Wakil said that, as a measure to restore peace, visible patrol teams have been deployed across the council to maintain law and order as well as engage the youths on the need to stop the violence.

The Command spokesperson disclosed these through a statement made available to newsmen on Saturday and explained that the violent demonstration was carried out at about 5:45 pm yesterday.

“The Police have since deployed all Tactical Teams, Mobile Police Force, and Rapid Response Squad (RRS) whose joint efforts brought the situation under control.

While urging residents to eschew violence, he stated that the Police Commissioner has appealed that everyone go about their lawful business without fear of intimidation as normalcy has been restored to the affected area.

“The Command would like to use this medium to reiterate the need for parents and guardians to maintain strict vigilance over the activities of their wards, particularly youths,” Mohammed said.

“The Commissioner of Police also urged Religious Leaders, Community Leaders, and Elders generally to always speak to youths to desist from anything that could temper with the security of their areas.”

The violence in Bauchi is coming with the country yet to resolve the case of Deborah Samuel, the 200-level student of the Shehu Shagari College of Education Sokoto, who was killed by a mob after being accused of blasphemy.

Deborah’s case sparked outrage, drew condemnation, led to the arrest and arraignment of two suspects, a violent protest (targeted at the Catholic Church in Sokoto) by youths asking for the release of those arrested, and the imposition of a 24-hour curfew on the state by the government.

The curfew was only lifted on Friday, some eight days after the killing. All forms of processions remain banned in Sokoto.