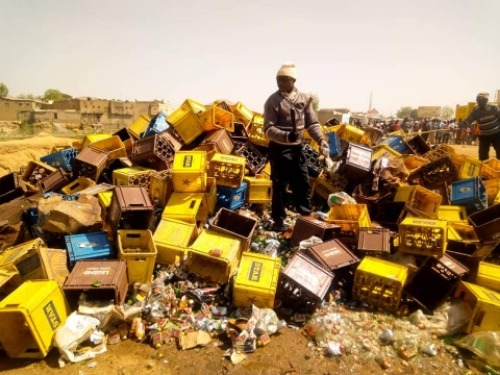 The Bauchi state Islamic Police otherwise known as ‘Hisbah’ has destroyed a total of destroyed 260 cartons of alcoholic drinks, during market raids in Misau Local Government Area of the state.

The board submitted that the Shari’a police destroyed the drinks in compliance with the provision of Section 403 of the Bauchi State Laws which empowered the Hisbah to prohibit sales and consumption of alcoholic beverages in the prohibited areas.

This was disclosed in a statement signed by Bauchi Hisbah’s permanent state commissioner, lawyer Aminu Isah, who made it available to newsmen on Sunday.

According to Isah, the destruction of the alcoholic drinks was carried out in the presence of the Executive Chairman of the Bauchi State Sharia Commission, Alhaji Mustapha Baba Illela, critical stakeholders and security agents.

Isah expressed the Islamic police’s commitment to the full implementation of Sharia law across the state without any fear or favour towards making the state free from crime.

“The state Hisbah command would like to reiterate its commitment and determination in ensuring that the provision of Sharia will continue to be fully implemented across the state and without vindictiveness, witch hunt, fear, or favour.