What Abba Kyari told me before his death- Keyamo 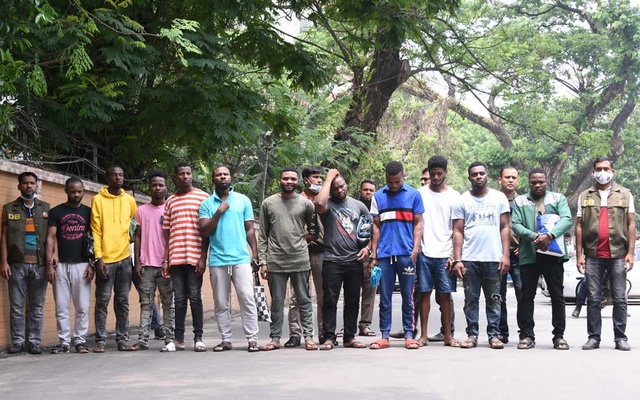 The Bangladesh Police has arrested 11 Nigerian businessmen and one Bangladeshi for allegedly engaging in Cybercrime and other crimes in the country.

They were said to have swindled many businessmen across the country after promising to assist them in exchanging their Bangladesh currency into US dollar.

At a press briefing on Thursday, the police disclosed that investigations revealed that the suspect and their Bangladeshi counterpart, Chadni Akter, were apprehended during different operations conducted at separate communities in Dhaka yesterday.

The police added that Akter, who often acted as the intermediary between the Nigerians and their victims, would help act as a fake customs official.

The Police Commissioner at DMP’s Detective Branch, Hafiz Akter, disclosed that Okechukwu and Emmanuel were the mastermind behind the fraud group,

He explained that both men usually communicated with their accomplices before sharing the proceeds of their fraud with other members of the syndicate.

“The leaders of the fraud ring are Osita Okechukwu and Chisom Emmanuel. They used to maintain communication with their Bangladeshi accomplices and distribute the embezzled money among other members of the gang,” he said

According to him, the other members of the gang swindled people out of huge amounts of money with promises of expensive gifts and investment after developing a virtual friendship with fake Facebook ID as an American or European citizen.

Akter said that some items recovered from the suspects’ possession include: a dollar ‘trick’ machine, 17 phones, two laptops, chemical bottles and copies of warrants.

He further said that in addition to Chadni, who is an accomplice, several Bangladeshi citizens were involved with the gang, adding that the law enforcers have launched a manhunt to trace out other criminals.

Pilot, five others die during plane crash in Haiti