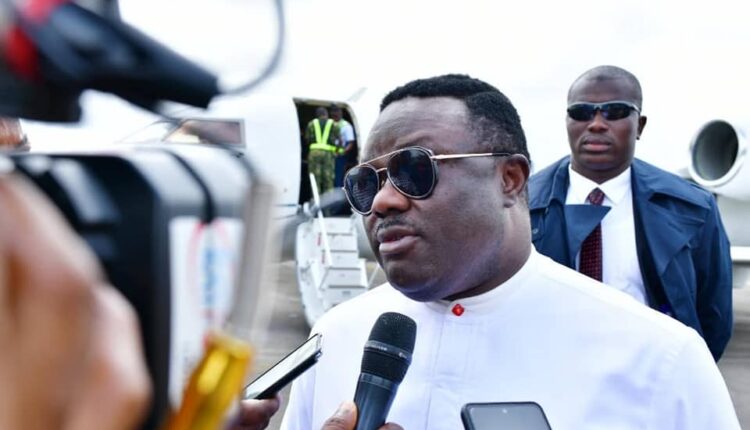 The Cross River State governor, Ben Ayade, has promised that the state would work hard to ensure All Progressives Congress (APC) presidential standard-bearer, Bola Tinubu, get all votes cast during the exercise next year across the state.

Ayade said that he remained committed to ensuring that the party achieve victory at the polls regardless of the outcome of the presidential primaries.

Speaking for the first time after the party’s Presidential Primaries, Ayade, who addressed the Press at the Margaret Ekpo International Airport, Calabar, said that his inability to get the party’s ticket would not affect the decision to ensure APC becomes victorious next year during the poll.

“As for my presidential ambition, indeed, l am grateful to God that He gave me the opportunity to showcase to the country what I had to offer. I am happy because sincerely, l like the reactions that l have received from various people about my speech at the primaries.”

“There was a clear indication that everyone knew that l had something to offer this country, but it was not my time, it was not my day. It was someone else’s and l am happy for Asiwaju Bola Ahmed Tinubu who has taken the ticket to our party.

“Based on the principle of our party, we will all work to deliver him come 2023. Cross River will ensure a hundred percent votes for our presidential candidate.”

On his recent foreign business trip, Ayade disclosed that the object of his visit to Spain was to explore opportunities for the take-off of Cally Airline as an entity.

“I just got back from Spain where l went for an extensive meeting and discussions with the intent to actually bring oxygen to Cally Air. As you are well aware, Cally Air has two aircraft and we need three to be licensed to actually run an independent airline. That has been a challenge for some time now.”

According to the governor, we had a useful and fruitful conversation with some companies out there with the intention to provide us one aircraft that will enable us to have three aircraft, so we can run in full swing.”

Additionally, Ayade further hinted that “we have spoken to some cargo companies to see how they can partner with us for the Obudu Cargo Airport. Work at the airport has reached a very advanced stage and l am very convinced and confident that before long, the Obudu Cargo Airport should be fully operational. So we need to start having a foot falls ahead of time. That explains why l really took out time to get that done.”