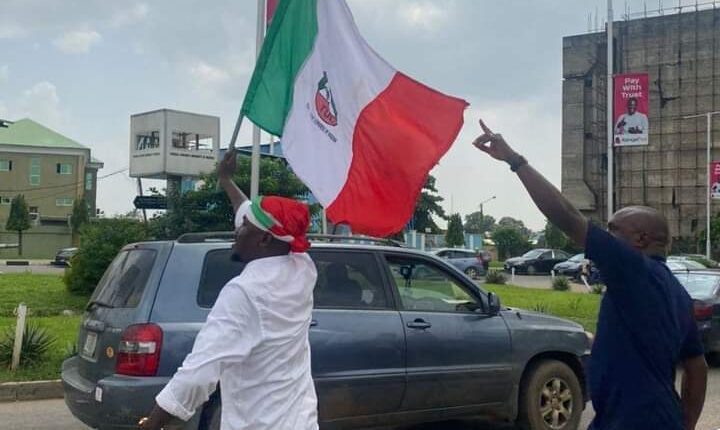 After hours of protest at the entrance gates of the Murtala Mohammed Airport 2 (MMA2) Terminal in Lagos State, aviation workers her suspended their industrial action the 34 disengaged colleagues were recalled by the terminal operator.

It was gathered that they vacated the entrance gates for the airport and suspended the strike action after a meeting with the operators of the airport terminal, the B-Courtney Aviation Services Limited (BASL).

The aviation workers under the aegis of the Air Transport Services Senior Staff Association of Nigeria (ATSSSAN) announced the suspension on Wednesday, hours after blocking the MMA2 terminal gates, disrupting airport operations as airlines suspend flights.

The union protested against what they described as an unprovoked termination of their colleagues’ appointment by the terminal operator in the state.

The union listed those affected by the disengagement to include ATSSSAN Branch Chairman, Secretary, Treasurer, and Women Leader who were said to demand “the payment of terminal benefits to staff members who exited the service of the company lawfully in line with the signed Conditions of Service”.

However, the General Secretary, ATSSSAN, Francis Akinjolie, told newsmen that BASL has recalled the disengaged workers after a meeting with the union.

“The strike that was embarked upon today against the Bi-Courtney Aviation Services Limited has been called off pursuant to the acceptance by the company to recall the laid-off members of our union and an undertaking to pay their salaries,” Akinjolie added.

According to him, the agreement was reached at a meeting empaneled by the Ministry of Labour and Employment; Nigerian Civil Aviation Authority (NCAA); Federal Airports Authority of Nigeria (FAAN); Nigeria Airspace Management Agency (NAMA), and airport security agencies.

Nigerians and hunger for death