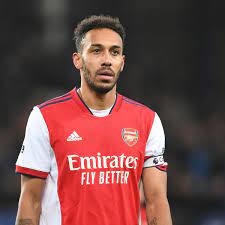 Arsenal forward, Pierre-Emerick Aubameyang has tested positive for Covid-19 shortly after arriving in Cameroon for the Africa Cup of Nations, which put his involvement for Gabon into uncertainty.

The 32-year-old Garbon captain, was expected to play a major leading role in his fifth AFCON tournament in a tough group alongside Morocco, Ghana and first-time qualifiers Comoros.

It was widely reported that since landing in Cameroon, Aubameyang had gone for testing but returned with a positive test for Covid-19.

Aubameyang’s isolation loom uncertainty as it likely to rule him out of the much tougher clash with Ghana as Gabon are due to play their first group game against Comoros on Monday,January 10.

He would be expected to be out of isolation and available by the time Gabon face Morocco in the third and final group game on 18 January, which could prove decisive.

Before now, Aubameyang hasn’t played for Arsenal since early December after a disciplinary breach saw that continues to cloud his club future and saw him dropped from the squad.

As far as his club future is concerned, Aubameyang has been linked with a January switch to an ambitious Newcastle desperately trying to avoid relegation and it was reported in recent days that Arsenal have made a number of top European sides aware that he is available.