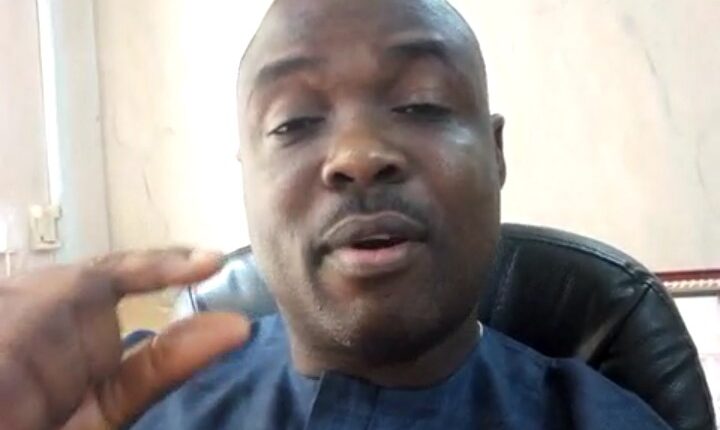 Share
An aide to former Vice President, Atiku Abubakar, has described the leadership crisis rocking the All Progressives Congress (APC) as a pointer that the party was already sinking and would in no time go into extinction.
The aide, Oladimeji Fabiyi, stated that the party lacks the capacity and intelligence to manage its own crisis and that it was a reflection of how Nigeria was been govern by the ruling party since assuming leadership of the country in 2015.
Fabiyi, who was Deputy Director, mobilization for the Atiku Presidential Campaign team, stated that the APC led-Federal Government was characterized by deceit, lies and dishonest in last five years of the administration.
In a statement made available to The Guild on Friday, he stated that the party cannot be trusted with power and lacks the capacity and intelligence to manage its own crisis, an indication of what will happen in build-up to 2023.
The aide to the former vice president, while sympathizing with APC for the challenge that had befallen it six years after formation, alleged that lack of central figure that can pacify aggrieved members was further responsible for the continued crisis.
Fabiyi, who was a member of the PDP screening committee for Edo State gubernatorial election, hinted that what had kept PDP united over the years was its unique way of managing internal crisis whenever they arise.
“Following the recent imbroglio that is pervading the ruling party, there is every likelihood that the party, sooner than later may be heading into extinction, it’s a time bomb ticking to explode. For instance, in the last 48 hours, the party had exhibited untold disgrace and have been receiving knocks from both the members and non-members alike, no thanks to the suspended selfish, double-faced, arrogant National Chairman of the party- Adams Oshiomole.
“Oshiomhole by his character, if made the President of Nigeria will protest against himself. Under his leadership, the party became so unruly, pompous, and exhibited immense lack in character, discipline, colour, and finesse.
“The National Chairman in his proud and arrogant characteristic manner orchestrated the disqualification of Governor Obaseki which obviously did not go down well with many stakeholders and members of the party.

“There is every indication that the confusion and disgruntlement in the party are of monumental dimensions judging by the news coming from the headquarters of the party where three members of the National Working Committee (NWC) are laying claims to the vacant position of the National Chairman”.

While arguing that under APC-led Federal Government the country has witnessed two recessions in quick succession with plans of any tangible economic policy insight, Fabiyi said that there were inconsistencies in policies and programme introduced by the administration.
“If the government of Buhari had taken and considered most of the well thought out and tangible socio-economic solution proffered by the former Vice President Atiku Abubakar, perhaps our country will not be where it is today, gliding gradually into a failed nation”.

The aide argued that neglect of the advice has put Nigeria in debt and that Atiku had raised alarm over what may become of the country’s economy if the Buhari-led administration continues to secure loans without commensurable revenue to pay back debts that accrue from it.

“In my opinion, it’s time Nigerians rise and demand good governance and accountability that is lacking in the President Buhari administration. We can not continue to be called and known as the world capital of poverty. 2023 is around the corner, the APC has shown a dangerous deficiency in the effective management of our resources, economy, security and even politics”.

Just In: Obaseki, Deputy get PDP’s waiver to contest primary