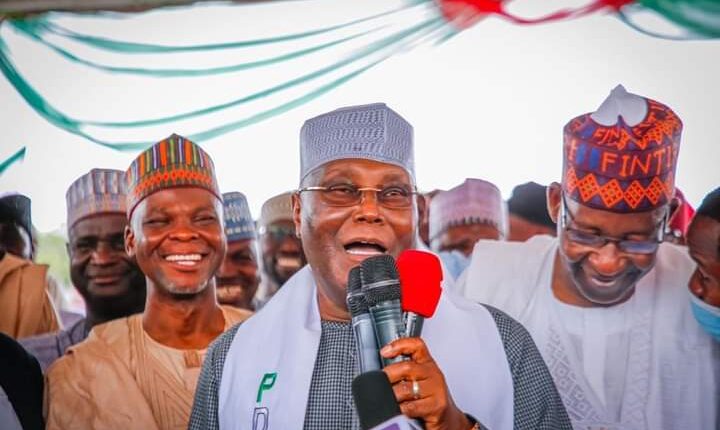 The former Vice President, Atiku Abubakar, has warned Nigerians not to vote for the All Progressives Congress (APC) presidential candidate during 2023 general election in the country, saying We have done a big mistake before by floating a party called APC.

Atiku said that Nigerians made a mistake voting the APC into power during the 2015 election and that they have another chance to remove the party come 2023 and return the Peoples Democratic Party (PDP), so as to address the challenges confronting the country.

He gave the warning on Saturday in Adamawa State, his home, when he joined the State Governor, Ahmadu Fintiri, to receive members of the APC that defected to PDP and they include the former Secretary to Adamawa State Government (SSG), Kobis Ari, Daniel Bwala, Sali Bodes, Umar Bello popularly called Calculate, Nedo Geoprey, and Philip Gutuwa.

Speaking at a reception for the new PDP members in the state capital, Yola, Atiku, who insisted that the ruling APC was Nigeria’s biggest mistake, urged Nigerians not to be carried away by APC tactics which he described as a gimmick.

He said: “We have done a big mistake before by floating a party called APC. But from today, I’m calling on you Adamawa people to leave your parties and join PDP because it is the future and the masses’ party.

”It was PDP that gave back life to Adamawa State after it was slain by the APC and usher it to its present state of development. Our schools are now better and our health institutions are in superb shape. I pray that this event will mark the beginning of the internment of the party (APC).”

Addressing the defectors and members of the PDP, Fintiri assured the former APC members that they would be treated fairly and will be given a level playing ground.

The governor said: “I want all of you to give the new defectors the needed cooperation and level playing field as we have no stranger in the party. Allow those who want to contest among them to participate in the electoral process and they should be well accommodated and given a level playing ground.

“But let those who lose election remain in the party because we will not be happy with people whose aims are only to contest election under our platform,” he added.

Speaking on behalf of the defectors, Kobis and Umar Jada said they left the APC following its bad performance within the state and across the country.