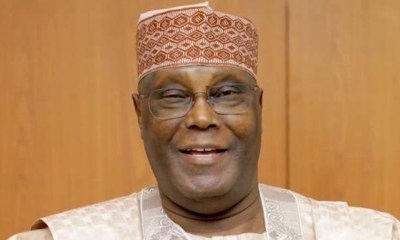 The Former Vice President of Nigeria, Atiku Abubakar, has disclosed that he would on Wednesday officially be declaring his intention to join race of who to become next Nigerian president on platform of People Democratic Party (PDP),  even though other aspirants from his party had continue signifying similar interest.

Atiku, who was PDP 2019 presidential candidate, disclosed that his plan to join 2023 presidential contest was as a result of a group of patriotic Nigerians who considered him best candidate to be in charge of the nation’s affairs, purchased presidential normation form for him, being the group gesture and expression of trust and believe in candidacy and programs of the former president.

He hinted that he would officially make his plans known to the public coming Wednesday in Abuja, just three days before All Progressive Congress (APC) convention, slated 26th March, and that his supporters would be briefed on next line of actions that should be expected from him.

However, with Atiku joining list of politicians who had made their intentions known to the public, the move would be an indication that the former vice president’s party, PDP,  is against rotationing of presidency and that chances of zoning the seat to Southern regions of the country as expected are also slim.

The former vice president, through a statement released on Sunday from his media office, stated that the official declaration of his intention to repeat 2019 history, would kick start his participation in the race for the presidential ticket of the PDP ahead of the 2023 general election.

He said: “After several months of consultations with stakeholders across the country and in the diaspora, as well as all organs of the Peoples Democratic Party, Nigeria’s former Vice President and presidential candidate of the PDP in the 2019 election, Atiku Abubakar, will officially declare his intent to run for the 2023 presidential election on Wednesday, 23 March, 2022.

According to him, the event will have Atiku Abubakar’s friends, associates, political leaders, party faithful in attendance and take place at the International Conference Center, Abuja at 11 am.

“His official declaration kick starts the former Vice President’s participation in the race for the presidential ticket of the PDP ahead of the next year’s general election”, he said.