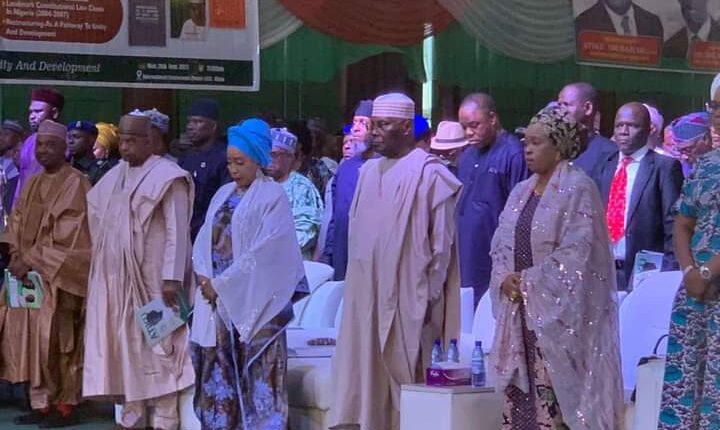 Few hours after Independent National Electoral Commission (INEC) removed embargo, placed on election campaign for political parties, the People Democratic Party (PDP) Presidential Candidate, Ariku Abubakar, has inaugurated members of his campaign council who would be steering affairs and running activities of the presidential candidate campaign from the day its kicks off, and throughout elections’ period.

Atiku,  who also released three books dedicated on his service to Nigeria and humanity over the years, charged the members of the council to hit the ground once the inauguration is over, saying the tasks ahead of PDP do need a quick approach, so as to show how prepared is the team to take back power from All Progress Congress (APC), come 2023.

He stated that the team’s mission is to first take over mantle of leadership from the ruling party, claimed to had driven Nigerians into mess, before rescuing and rebuilding the country could be possible.

Speaking during inauguration of the PCC’s members and book launch on Wednesday in Abuja, the former vice president said that there is need for his party to remain united in purpose, and come together to fight and win entire elections in 203.

Atiku added that the entire PCC’s members and PDP’s faithful across Nigeria would be needed for ardouus tasks facing the party, just as he expressed optimism that concerned Nigerians would also join hands in helping rescuing, rebuilding and repositioning their beloved country.

According to him, the distinguished members of the presidential campaign council were formed as trusted hands and individuals with believe that team is up to the task of taking back power from APC by winning the 2023 elections.

The PDP presidential candidate indicated that not all members of the party would be appointed into the campaign council but that, those selected among the millions to join the team were chosen base on past contributions to the party.

He affirmed that PCCs; members would carry along every other members of the party, across state and zones, so as to ensure a formidable team that can hit nooks and crannies of the country is created.

Atiku, while congratulating the men and women on the list of PCC, charged the members on their commitments and dedications not only towards winning the elections, but also on laying strong foundation that can rebuild sickning Nigeria.

“I wish to congratulate all the men and women nominated to serve in the Presidential Campaign Council.  You have been selected from among the millions of our party members to join this esteemed council because of your past contributions to the party.

“Naturally, not all members of our party can be in the Presidential Campaign Council. But every single member of the PDP is an important member of the party and each one of you is still entrusted with the responsibility of leading our party to victory in next year’s elections. Those of you who have not found yourselves in the Presidential Campaign Council are just as important as those who have,  and we do not take your contributions for granted.

“I wish you all the best in your endeavours.  And I welcome you all as you join me to lead the efforts to win next year’s general elections and help rebuild our country.  Together, as one, we can get this job done, he added.