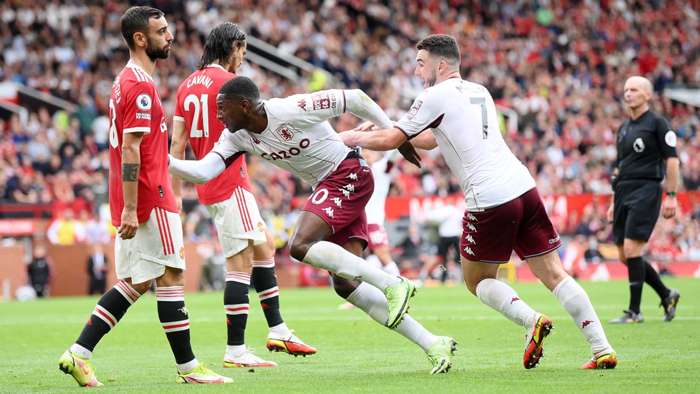 The victory over Manchester United boosted Aston Villa’s chances of progressing to the league table summit after it leapfrogged Tottenham Hotspurs into the seventh spot on the log.

Aston Villa’s away winning at Manchester United marked the first time after 11 years that they had won any match against their opponent at Old Trafford in 2009.

During the match played before 42,602 spectators on Saturday, Manchester looked to bounce back following their disappointing Carabao Cup exit at the hands of West Ham during midweek, but the spark required to get back to winning ways was badly missing.

And after several minutes in the game, Aston Villa’s center back, Kortney Hause, at the 88th minute of the match, slots in the lead following the ball received from his teammate, Douglas Luiz.

The defender, only in the starting eleven for the match due to his colleague’s unavailability, was the only difference between the two teams as his powerful header from six yards out with two minutes to go during the normal time was enough to gather all three points for the visitors.

It was a frantic end to the match though as Hause thought he had given away the equalizer at the 91st minute after his handball inside the area gave United a late chance to level the score from the penalty spot.

The host, however, could not capitalise on it after it’s Portuguese forward, Bruno Fernandes, who assumed the captain role following the substitution of the team’s captain, Harry Maguire, sent his spot-kick over the bar, much to the delight of the travelling supporters.

After the match that saw Portuguese forward, Cristiano Ronaldo, played the full game, the Ole Gunnar Solskjaer tutored side dropped one spot on the log, currently seat in fourth place.

Manchester United would be back in action in midweek when they host Villarreal in the Champions League, before welcoming Everton to Old Trafford in a week while Aston Villa plays again next Sunday, travelling to face Tottenham HotSpurs.
Earlier as the game progressed, Villa had a clear, coherent plan, which they executed well, while United lacked real imagination when it came to their own attacking play.

The front three, particularly Anthony Martial, were rightly criticised for their display in the Carabao Cup, but here Cristiano Ronaldo was back and looking to add to his goal tally of four goals in his first three matches back at the club.

The five-time Ballon d’Or winner, though, was barely in the game, managing just four shots and none on target. Instead, it was Mason Greenwood who was the brightest of the front three here, as his direct runs allowed him to get behind the Villa backline regularly, but even he could not find a breakthrough.

“Bring on Cavani,” was the chant from Stretford End with 10 minutes left on the clock, but when the Uruguayan was eventually introduced with seven minutes to go he could not make the difference Solskjaer needed either.

United have now had 55 shots in their last two games, but only 10 of those have been on target and they have drawn a blank each time.