Germany turns down proposal on fans return during football… 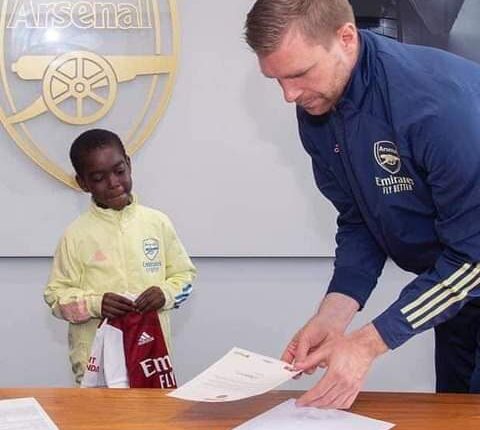 As part of the efforts to nurture future talents, England football club giants, Arsenal, has signed a nine-year-old Nigerian, Munnir Sada, into its academy in London.

The youngster from Northern Nigeria, according to family sources, would be under the club’s tutelage pending when he becomes eligible to sign a professional contract with the team and possibly break into Arsenal’s first team.

Munnir’s mother, it was learnt, hails from Katsina State, while his father was said to be an indigene of Zaria town, in Kaduna State.

The young soccer sensation was the first Nigerian teenage footballer from the Northern region to put pen to paper for the Gunners, as the illustrious English Premiership club is fondly called.

Munir, however, was the second Nigerian teenager to join the English team after a nine-year-old Nigerian, Jayden Adetiba, was also snapped up by the club into its Academy after five weeks of trial.

The Nigerian-born Adetiba, who relocated from England to South Africa 2 years ago, played for the SuperSport United Soccer School in Cape Town.

Adetiba’s coach, Brent Sanders, described the Nigerian as a special breed, saying Jayden worked with me for two years from the age of seven, and from his first practice session I could see that he was an exceptional talent that stood out in the group.

“His mentality is different, the way he goes about his training. His work ethic is a lot better than other kids his age, and I think that comes down to the way he was brought up,” he added