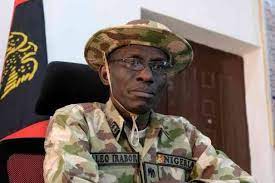 The Chief of Defence Staff, CDS, Lucky Irabor, has tasked celebrities and influencers in the Nigerian entertainment industry to play active roles in stimulating public support towards promoting national security.

Irabor stated that the security of a nation remained the responsibility of every citizen, adding that media personalities were critical stakeholders and vital components in security issues, adding that as celebrities they had the capacity to positively influence public perceptions on contemporary security challenges.

He was said to have made the call Yesterday, at a parley with some selected artists from the entertainment industry at the Defence Headquarters (DHQ) in Abuja.

He further noted that their adherence to his call will further complement the efforts of the military and other security agencies, tasked with the responsibility of ensuring security of lives and property of all citizens.

“We want to win you over to be on the same page with better understanding on issues of insecurity generally. We want you as celebrities to use your overwhelming influence, entertainment platforms and social life to build a better and progressive nation.” he said.

In addition, the Chief of Defence Civil Military Cooperation, Frederick Ogu, said that the nation’s troubling time required all citizens’ supports, adding that it was the opinion of the CDS that people from different walk of life, influencers and the populace should be engage in the promotion of national security.

“Recognising the influence that you have on the Nigerian populace, especially the youths, we found it necessary that we should speak with you and encourage you to play your own part, so that this country can be a better place for us to live,” he said.