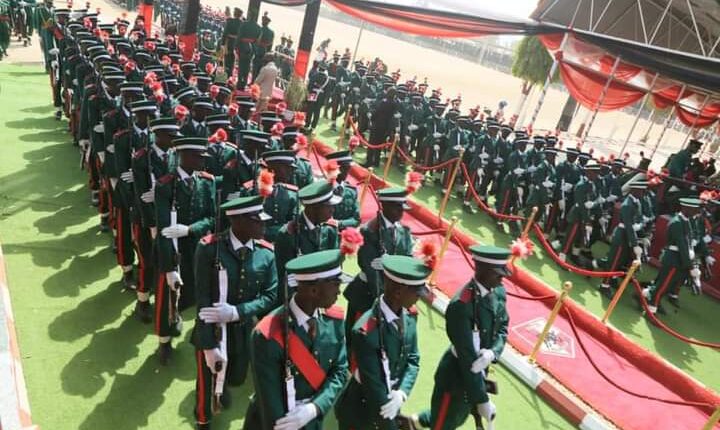 As part of the efforts to end insurgency and banditry, the Nigeria Army has announced that 4,800 new soldiers have been admitted into the force to boost its human capacity.

The new recruits were expected to contribute to the army’s ongoing operations in various parts of the country particularly the northern part of the country.

Speaking on the task that awaits the new recruits, the Chief of Army Staff, Lieutenant General Farouk Yahaya, on Saturday, disclosed that the new recruits would be deployed to different parts of the country to maintain security and protect Nigerians.

“They commenced their training in August and they have been trained as professional soldiers in line with our training directives, taking cognisance, of course, of the current environment,” the army chief said.

The army boss noted that the over 4,000 newly trained army would be deployed to different formations, adding we hope they will deliver as they are deployed across all the theatres.

He said the army portal has been opened for a new set of recruits who were expected to commence training next year’s January.

“The drive as mandated by Mr. President is to increase our strength and have more feet on the ground in addition to all the things we are doing. And he has provided all the resources for this.”

He added that there were also provisions for specialized training being given to those already in the service, to enhance their capabilities.

Yahaya, while urging the newly inaugurated soldiers to apply the mental, physical and moral training acquired over the past few months as well as those they will be exposed to at their respective formations, warned them to uphold the Nigerian Army’s core values of Loyalty, Selfless Service, Courage, Discipline, Integrity, and Respect for Others.

He also asked them to remain loyal to constituted authorities at all times and place the interest of the nation ahead of their personal convictions, even as he reminded them to be ready to go wherever ordered to defend the territorial integrity of Nigeria at any cost.