Police officer under detention after shooting girlfriend in… 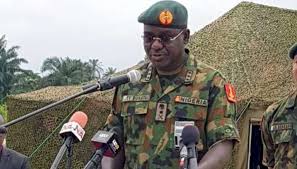 The Nigerian Army has disclosed that it was victorious over Boko Haram terrorists during its recent Operation Lafiya Dole (OPLD) carried out in Yobe State, in which it recorded neutralization of over 100 members of the notorious terror organization.

It stated that its troops had successfully foiled attempts being made by about 105 Boko Haram and Islamic State West Africa Province (ISWAP) members to attack and infiltrate Buni Gari Village in Yobe State.

The Chief of Army Staff, Lt. Gen. Tukur Buratai, confirmed that the force had neutralized insurgent activity in the region and lauded the troops’ gallantry and resilience in the battle against Boko Haram terrorists.

Speaking during a visit to injured soldiers at the Field Ambulance Logistics Base, Damaturu, and the Special Forces’ School, Buni Yadi on Sunday, Buratai expressed confidence in the army’s ability to conquer insurgency within Nigeria’s borders and assured the men of government’s drive to ensure provision of necessary support items to further the fight against insurgency.

He called for soldiers to press forward in patriotic service of the nation and urged the troops to increase efforts to ensure that terrorism was totally defeated within the country’s borders.

Buratai sympathized with the wounded troops, and expressed hopes that the injured soldiers would regain full health.

Also speaking during the visit, Commander of Sector Two OPLD, Brig. Gen. Lawrence Araba, expressed appreciation for the Chief of Army Staff’s presence and revealed that the Buni Gari operation had led to the recovery of several arms and ammunition from the 105 deceased terrorists.

Araba stated that the soldiers had captured five AK-47 Rifles, three GPMG, one Duska Anti Aircraft Gun, onePKT Gun, two handheld radio and one gun truck, which was destroyed in the attack.

He added that other items recovered during the operation also included two hand grenades, two magazines with ammunition and assorted hard drugs.

“Based on intelligence received about the plan by the terrorists to attack Buni Gari, our troops swiftly intercepted and engaged the criminals in fierce battle that led to the killing of 105 Boko Haram/ISWAP terrorists as well as the capture of several arms and ammunition from the criminals”.