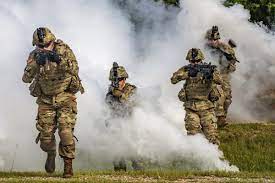 No fewer than 27 drug smugglers have been killed by Jordanian Army during an interception which thwarted their  attempt to cross the border from Syria carrying large quantities of amphetamines drugs.

The army stated that other smugglers who were suspected to be carrying drugs were said to have fled back into Syria during the attempt, adding that one of an increasing number of such incidents over the past year that had led them to toughen its rules of engagement with smugglers.

Disclosing the development on Thursday, an army spokesman, confirmed that the army had also found large quantities of drugs particularly  an amphetamine known as Captagon which was said to have been hidden in Syrian trucks passing through Jordan’s main border crossing to the Gulf region.

As gathered, Captagon has a thriving market in the Gulf, and U.N. drug experts say Syria, shattered by a decade of civil war, has become the region’s main production site for drugs also destined for Jordan, Iraq and Europe.