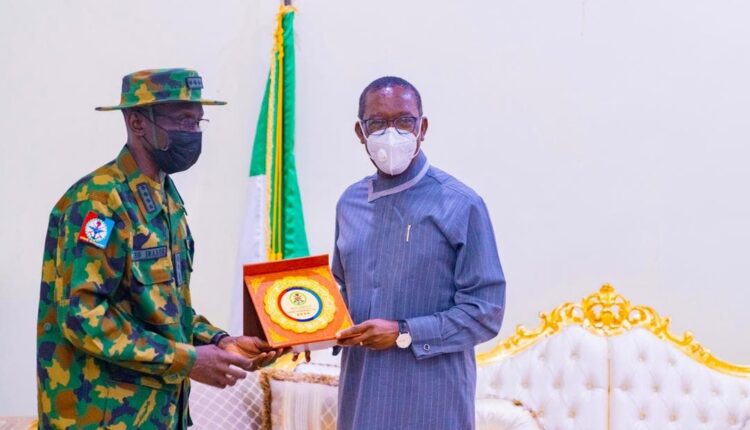 The Chief of Defence Staff, Gen. Lucky Irabor, has said that the Nigerian Army remained committed to enforcing President Muhammadu Buhari’s shoot-at-sight directive on treatment of anyone found with sophisticated weapons, particularly AK-47 Rifles across the country.

He added that the presidential directive to shoot-at-sight anyone with an AK-47 rifle was very clear and would be enforced in curbing proliferation of illegal arms in the country .

Proliferation of illegal arms in the country, the army boss said, remained threat to Nigeria’s corporate existence and that the military under his watch would ensure protection of Nigerian territorial integrity from internal and external aggressions.

Irabor disclosed this yesterday’s night at Asaba while addressing journalists after a courtesy visit to Governor Ifeanyi Okowa at Government House.

He stressed that since Nigeria as a country forbade illegal bearing of arms, anyone found with such weapons was an enemy of the state and would be treated as such to serve as deterrents to others planning to pick up arms against the state.

“The mandate of the President for dealing with everyone holding AK-47 illegally is a mandate that must be enforced because we are a state that does not condone illegal bearing of arms.

“The armed forces and other security agencies are the only institutions that are mandated to carry arms in the course of their duties. So anyone who is carrying an AK-47 or any other weapon, for that matter, is considered a threat to the existence of the state.

“And, because he is an enemy of the state, it must be addressed; so it’s not a question of my view but rather a question of having to carry out the mandate of Mr President.

“The Armed Forces in partnership with other security agencies will do all that is necessary to bring peace and security across the land and Nigeria certainly, will know peace again,” the CDS said.

He said that he was in Delta for the first time since he was appointed CDS and commended Okowa for his support to the armed forces and other security agencies in the state.

“Delta is my home and it feels good to be home, and I said that I cannot come home without paying a courtesy call on the Executive Governor of the state who has done pretty well, giving very credible support to the members of the armed forces and security agencies.

“I am aware of the threat dispositions within Delta even though it is stable now, but we know that there are areas of interest that we will need to do a lot to add value in up-scaling the security disposition of the state and this is part of what myself and my colleagues were doing. I believe that the state will in no time begin to experience greater level of peace and security,’’ he added.

Speaking earlier, Okowa congratulated the CDS on his appointment and promotion and urged him to do more to secure the nation.

“I want to use this opportunity to congratulate you again on your appointment and subsequent promotion to the rank of General. We have had a very challenging time because of the COVID-19, but when the appointments were made, we were very happy because we believe that it will improve the security situation, with the injection of new strategies.

“I also believe that there is no problem that is insurmountable and with the cooperation of all security agencies we can combat the insecurity in our land. I must say that you have started well because I had the opportunity of being at the stakeholders meeting in Abuja and I must commend you for that.

“Here in Delta, we have our own security outfit – Operation Delta Hawk – and we are able to work together in terms of our information gathering. We will need more support, especially in the Warri area where we have oil installations because when the place is more peaceful and secure, more industries will come,” the governor stated.