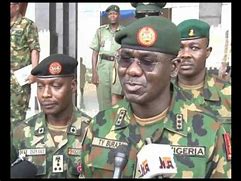 The Nigerian Army has disclosed plans had been concluded to begin Operation Crocodile Smile VI exercise in line with its commitment toward fighting cyber warfare alongside other negative propaganda on social media despite concerns raised by Nigerians that the special operation was ill-timed owing to ongoing protests against police brutality and bad governance across the country.

Nigerians had taken to social media to register their displeasure over the operation’s timing, saying the exercise was aimed at stifling the ongoing protest against police brutality and bad governance and that such development could lead to full-blown violence in the country.

Activists, civil societies, including politicians had also lent their voices by warning the military against obstructing citizens from demanding accountability and seek need reforms across all tiers of government, including that of police.

Unperturbed by the concerns raised, the army explained that contrary to several reactions against the operation, the exercise was an annual operation by the military and that the 2020 edition only coincides with the ongoing protest.

The Chief of Army Staff,  Lt.-Gen. Tukur Buratai, said that the operations scheduled to commence from October 20th to December 31st would include cybercrime fight aimed at clamping down on internet hackers and also to counter negative and malicious posts on social media.

Briefing newsmen yesterday in Borno, Buratai who was represented by the army’s Chief of Training and Operation, Maj. Gen. Nuhu Angbazo, said that apart from the cyber-warfare, the army would also intensify efforts in positive identification component aimed at identifying Boko Haram terrorists fleeing from the North East and other parts of the country.

“The exercise is also planned to include the conduct of cybersecurity awareness seminars, detect and neutralize malicious posts, fake news, illegal recruitment scam, and internet hackers. Besides other major deliverables like the improvement of public safety for the end of the year.

“The exercise will also include Nigeria Army capacity against the hostile cyber act in defense of our National security and critical national infrastructure.

“It will also have a civil-military cooperation component which will include sanitation exercises, medical outreaches, road maintenance palliative, aid and succor to the aged and disabled members of our society and most importantly humanitarian assistance to the widows of our fallen heroes,” he said.