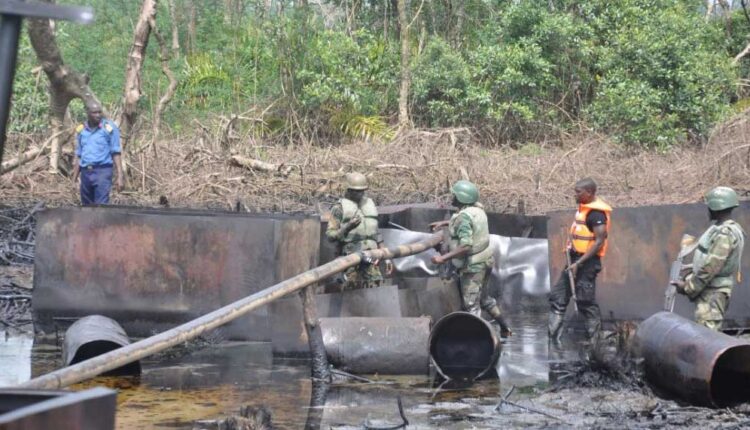 The Defence Headquarters (DHQ) has disclosed that troops of Operation Delta Safe have deactivated no fewer than 51 illegal refineries in the last two weeks and arrested 23 oil thieves across six states.

Briefing journalists while giving update on the military operations across the country on Thursday in Abuja, Onyeuko said that a total of 23 criminal elements were arrested and 73 rounds of 7.62mm ammunition, five cartridges, two AK-47 rifles, and one double-barrel gun were recovered in the course of the operations.

Onyeuko also said that one pump action gun and three locally-made pistols among other items were recovered. According to him, a total of 317,450 litres of illegally refined AGO, 8,000 litres of DPK and 159,000 litres of stolen crude have been recovered in the course of the operations.

“These were in addition to several other vehicles and boats loaded with sacks/polythene bags and jerry cans of illegally refined oil products and equipment used for illegal oil production as well as illicit drugs impounded by troops within the period.

“Troops of Operation Delta Safe have sustained operations to forestall the activities of economic saboteurs and other criminal elements in the South-South Zone.

“However, the Armed Forces of Nigeria and other security agencies will not relent nor rest on its oars in the fight against criminalities in all parts of the country.

“The Military High Command commends the continued sacrifices of its troops and salutes their courage and resilience toward achieving sustainable peace in the country,” he said.