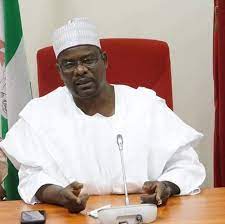 Ndume stated that the need for the military force to end the continuous torture and nightmare caused by the activities of terrorists across the country especially in the northern parts where they perpetrate most of their acts of violence, adding that it called for a better way of addressing insecurities in the country.

The senate leader who made the call on Wednesday when he led members of the committee on oversight visit to the headquarters of Joint Operation Hadin Kai in Maiduguri,  commended the army personnel for their immense efforts thus far as he urged them to do more  this year by ensuring that insecurities is eradicated.

He disclosed that  as Boko Haram members were surrendering, ISWAP was attacking people, particularly in southern part of the state, which makes it worrisome and should be looked into.

“It is also important that as we commend your effort to put you on notice. Please do more so that under your leadership (Theatre Commander) this year, it will be written in gold that you brought and end to insurgency. We are Borno to assess the security situation on ground as well as find ways of addressing the challenges,” he said.

Also, the Theatre Commander, Christopher Musa, lauded the committee for its commitment to address the challenges facing the army and assured it of the theatre’s commitment to discharge it assigned task.

As gathered,  while in Maiduguri, the committee also visited Babagana Zulum who disclosed that Abadam and Guzamala Local Government Areas are still under the control of ISWAP terrorists as over 20,000 Boko Haram members have surrendered.

Zulum commended the military consistency to fighting insecurity and insurgency across the country, adding that their efforts so far was trailing to the end of  terrorism in the state.

He further expressed the fears of  citizens of the state as regards the constant attacks of ISWAP in their communities which has made the state insecure for them to freely go about their activities.

” I am pleased to inform you that we have started witnessing gradual return of peace, but more need to be done, because, presently, Guzamala and Abadam Local Government Areas are still under the control of Boko Haram.

“Although, the current Service Chiefs, the Theatre Commander and indeed our General Officer Commanding 7 Division are up and doing. We want to commend the military and other para military personnel for their gallant efforts to see to the end of terrorism in this part of the country.

“Unfortunately, Government and people of Borno, especially those from southern and northern parts of the state are worried over the increasing number of ISWAP groups who have been terrorizing their communities,” he said

Dele Momodu up for 2023 presidential struggle