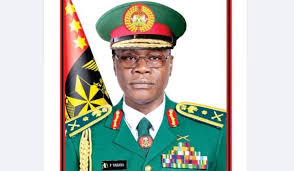 The Chief of Army Staff, Faruk Yahaya, has appealed to retired military officers to support and not turn their back on security agencies battling to end activities of Boko Haram and other criminalities across the country.

Yahaya noted that the Army was open to their invaluable contributions towards attaining her constitutional mandate and would always welcome their supports.

The army boss said that the task to eliminate criminal elements across the country demanded collaboration and that their support would go a long in assisting their plans.

He further said that they were welcome to attend functions and sessions in order to continue to extend their fellowship to the colleagues they were leaving behind in service.

Yahaya, who was represented by the General Officer Commanding 81 Division NA Major General Umar Musa, emphasized that retirement is an inevitable phase in the life of every military personnel as it marks the complement of active service to the nation.

He commended the retired officers for the remarkable achievements they made while in active service to the Nation through the NA.

The Army Chief further assured them that the NA will remain grateful for the services they rendered in the defence of their fatherland.

On his part, the President Mess Committee, Danlami Ndahi, noted that retirement marks the successful complement of active service to the nation and that it was worth celebrating.