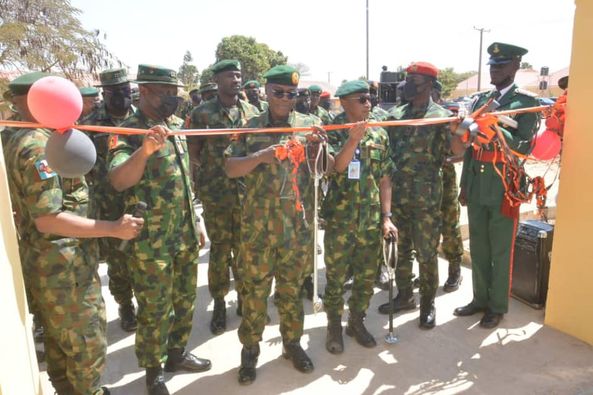 The Chief of Army Staff,(COAS), Faruk Yahaya,  has promised that Nigerian Army would continue to ensure priority is given to soldiers’ welfare for steady commitment of officers in discharging duties diligently needed for eradicating Nigeria of insecurity.

Yahaya stated that maintaining the welfare of soldiers is his agenda to help the military personnel to work at their best under a conducive working environment, adding it would be a morale booster for effective delivery of their responsibilities.

Through a statement released on Tuesday by the army spokesperson, Onyema Nwachukwu,  the chief of army staff indicated that the force’s priority was the welfare of its and commissioning of a newly completed official residence of Regimental Sergeant Major (RSM) of 1 Division, Nigerian Army and several other quarters for Senior Non commissioned Officers in Dalet Cantonment in Kawo, Kaduna, was an evidence that army would not leave its personnel to suffer basic needs, particularly shelter.

Yahaya emphasized that RSMs are very vital in the management of soldiers, adding that they play the crucial role of inculcating discipline, as well as promoting ethos, traditions and doctrinal values of the Nigerian Army, amongst personnel in formations and units.

He acknowledged that service discipline and experiential knowledge imbibed from RSMs by soldiers promote trust and confidence, which enhances stability of formations and units across the Nigerian Army.

The COAS further stressed that commissioning of the buildings is part of his welfare agenda for the RSMs, aimed at restoring the prestige of the office and motivating officers.