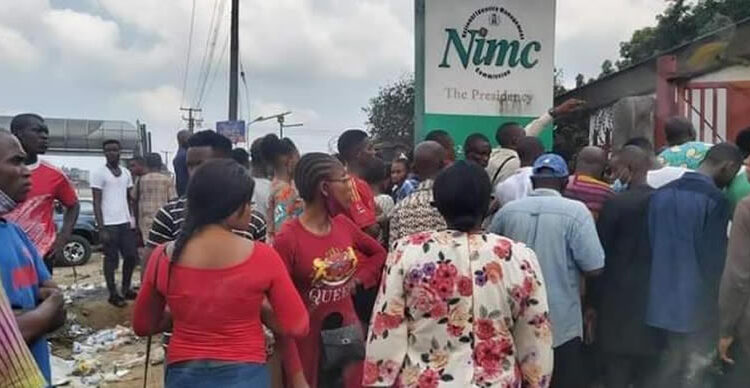 The suspects were apprehended by troops, who were deployed to troubled zones across the North to end insurgency, and found the NIMC staff at the Gagamari Internally Displaced Persons (IDP) camp in Niger Republic while trying to register non-Nigerians.

Confirming the arrest, the Director of Defence Media Operations, Major General, Musa Danmadami, disclosed that different items were recovered from the suspects.

Addressing newsmen during the biweekly briefing at the Defence Headquarters where he highlighted the achievements recorded by the military between October 6th and 20th, 2022.

Consequently, during the weeks in focus, 31 suspected Boko Haram/Islamic State of West Africa Province members were neutralized, while 10 were arrested and two civilians rescued.

Also, 366 Boko Haram Terrorists and their families comprising 23 adult males, 112 adult females, and 231 children surrendered to troops at different locations within the theatre.

According to the military spokesman, all recovered items, arrested terrorists, logistics suppliers, and rescued civilians have been handed over to the appropriate authority for further action.

Meanwhile, the surrendered Boko Haram/Islamic State of West Africa Province terrorists and their families are being profiled for other actions.

Danmadami said during the period under review, thirty-one suspected Boko Haram and Islamic State of West Africa Province members were neutralized, 10 were arrested and two civilians were rescued while a total of three hundred and sixty-six (360) Boko Haram terrorists and their families surrendered to troops at different locations.