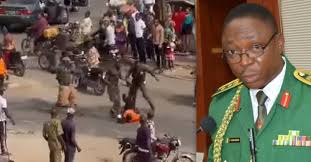 The Nigeria Army has arrested a Lance Corporal of the Nigerian Army who is suspected to be one of the soldiers who assaulted two traffic wardens in Oyo State following a viral video that revealed how the military men dealt with their counterparts.

Before the arrests, Nigerian Army headquarters had ordered an immediate investigation to identify and arrest the culprits which led to the arrest of the soldiers while others are been hunted.

As disclosed through a statement by the force’s Director Army Public Relations, Onyema Nwachukwu, Yesterday, the Preliminary investigations showed that the unfortunate incident had taken place on Friday, 7 January, 2022 at Adeoye Road by Ring Road of Oyo’s capital, Ibadan.

They stated that the ongoing investigations was yielding results as one of assailants has been taken into custody, adding that efforts are being made in collaboration with the Oyo State Command of the Nigerian Police Force to identify and go after the remaining culprits.

However, the statement expressed the force’s dissociation from the unruly and inhuman behavior of the suspected soldiers which they described as a very reprehensible conduct of the individuals seen in that video.

The Army further said that the vicious attack on fellow security personnel or any unarmed citizens in the manner seen in the video was not consistent with what the force stood for in terms of professionalism.

They assured that at the end of investigation, other suspects linked to the assault would be brought to book to face the law by going through the stipulated disciplinary provisions.