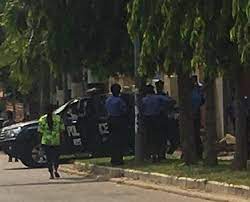 Dozens of armed policemen were reported to have taken over the national secretariat of the All Progressives Congress (APC), preventing movements around the premises.

The armed men who were said to have arrived in four patrol vans obstructed activities at the party’s national Headquarters, causing staff and visitors to panic after their sudden arrival.

As gathered, the policemen, accompanied by officers of the Department of State Service (DSS), on Wednesday, were seen at the party’s premises on Blantyre Street in Abuja.

Confirming the development to newsmen, the Secretary of the Caretaker Committee, John Akpanudoedehe said that the move was sequel to a security report.

He said, “It’s a routine thing. The police liaise with FCT Minister, the IG and other people if they have any information. Not only here, if you are coming to Abuja, going to the airport, we have the duty to protect the people who work here.

“We read security reports and I’m sure you are fully aware we have every security agency in our Secretariat. We are only acting on security reports, there is no cause for alarm,” he added.