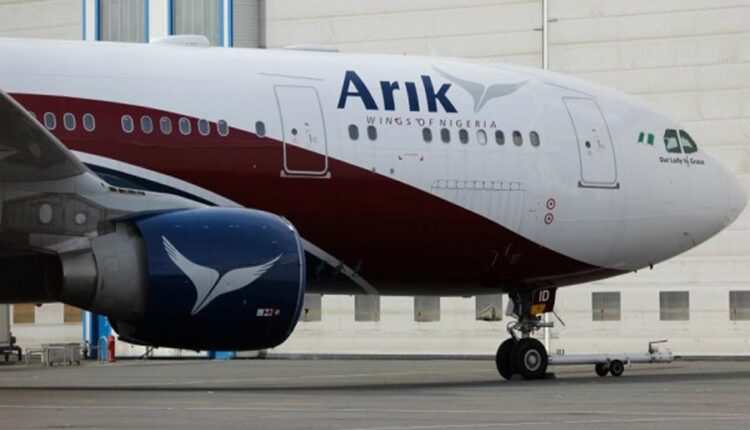 The management of Arik Air has appealed to stranded passengers whose travel plans were disrupted by Aviation unions protest over unpaid salaries and alleged unwholesome that grounded operations of the airline company.

The unions including the National Union of Air Transport Employees (NUATE) and Air Transport Senior Staff Services Association of Nigeria (ATSSSAN) were said to be protesting alleged nonpayment of staff salaries since April after placing 90 per cent of the workforce on compulsory leave and other anti-labour practices.

The Chairman, ATSSSAN, Innocent Atasie, who led the protest said that the workers resolved to shut down Arik operations nationwide when all efforts made to resolve the problem failed.

Addressing newsmen on Monday, Atasie said that the issues of nonpayment of staff salaries since April after placing 90 per cent of the workforce on compulsory leave had been a thing of concern to members of the unions, adding that the unions would continue the industrial action until such times when their demands were met by management of Arik Air.

“Our demands include payment of outstanding salaries arrears, signing of conditions of cervice, remittance of pension, tax, and statutory deductions to the appropriate authorities and to resolve other anti-labour issues. Others were payment of salary arrears of seven months, with a commitment to pay salaries as at when due, henceforth,” he had said.

But concerned by the plight of passengers and other customers affected by the unions’ protest, the Manager, Arik Air Communications, Adebanji Ola, said that the company had begun talks with necessary stakeholders to resolve issues from the unions.

Through a statement released to newsmen on Monday to convey the company’s apology, Ola assured customers with valid tickets who could not fly on Monday to modify such tickets at no cost for future travels.

“We wish to place on record that the picketing was illegal and has no backing of the aviation unions whose leadership have embraced dialogue by attending mediatory meetings called by the Nigerian Civil Aviation Authority (NCAA). The management strongly condemns this action and once again assures all stakeholders of a safe and conducive working environment.

“We shall also protect the interest of the flying public for a safe, friendly and on time travelling experience. We are already working with the Federal Ministry of Labour and Employment, Ministry of Aviation and NCAA to resolve all pending issues with the unions and a section of the staff. We are working to bring the situation under control and the public will be advised accordingly, ” the statement read.