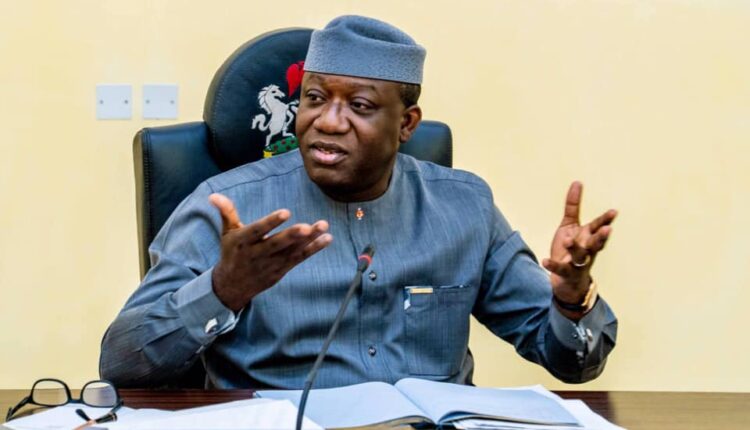 Barely 24 hours after alleged supremacy battle among Ekiti State All Progressives Congress  (APC) leaders came to fore, the party leadership has nullified all members suspension, including that of the state Govenor, Kayode Fayemi, said to have influenced suspension of 11 members recently.

The Guild had yesterday reported that the state chapter of suspended Oyetunde Ojo, son-in-law to the party’s national leader, Bola Tinubu, Special Adviser to the President on Political Matters, Babafemi Ojudu, and nine others over alleged anti-party activities.

Meanwhile, the party’s state Executive Committee, had earlier on Friday, announced the suspension of Fayemi on allegations of anti-party activities and funding the campaign of People’s Democratic Party’s candidate in the last governorship election in Oyo State, Seyi Makinde.

“Dr. Kayode Fayemi, the Executive Governor of Ekiti State is hereby suspended from the Party in view of his numerous anti-Party activities especially his role in the recent concluded governorship election in Edo State which is contrary to the provisions of Article 21 (A) (ii) of the APC Constitution.

“For five days prior to the Edo elections, Gov Fayemi hosted PDP big wig Mr. Femi Fani- Kayode in the government house in Ado Ekiti in the run-up to the Edo elections. It was here they perfected the coup against our party in Edo State,” the state’s APC SEC said in a statement.

But, the party leadership, through a statement by its Deputy National Publicity Secretary, Yekini Nabena, said that all purported suspensions, including that Fayemi, stands nullified.

The party claimed that the National Secretariat was yet to receive communication from the state chapter on the purported suspensions and that Fayemi remains the party leader in the state.

“The attention of the National Secretariat of the All Progressives Congress (APC) has been drawn to a purported and widely-reported suspension of the Governor of Ekiti State, H.E. Kayode Fayemi as well as an earlier reported “indefinite suspension of some other party members in the state.

“The actions are a nullity as the Party’s National Secretariat is yet to receive communication from the state chapter on the purported suspensions. We strongly advise all members to adhere to our Party constitution. Governor Kayode Fayemi remains the leader of the party in Ekiti State.

“In line with the mandate of the Governor Mai Mala Buni-led APC Caretaker/Extra-Ordinary National Convention Planning Committee and the President’s admonition to party members to ensure and support ongoing amicable and rancour-free settlement of internal party disputes, we call on our esteemed party members and leaders in Ekiti State to be duly guided.

“For the avoidance of doubt, the Architect Paul Omotosho-chaired APC Ekiti State Working Committee is the authentic, valid and duly recognised Executive as no factions or divisions exist in the state chapter,” the statement said.